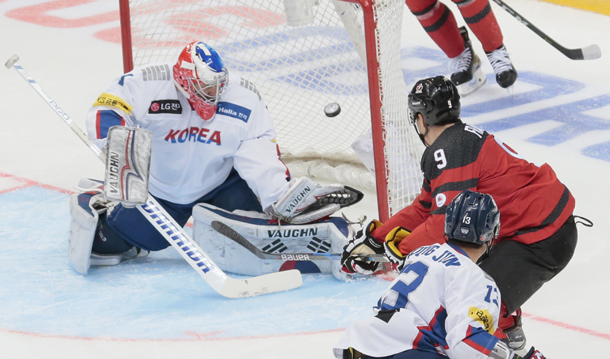 Korea suffered a 4-2 loss to Canada in a pre-Olympic men’s hockey tournament in Moscow, after squandering an early lead against the heavily favored opponent.

The 21st-ranked Korea saw their 2-1 first-period lead over world No. 1 Canada evaporate at the Channel One Cup at VTB Ice Palace in the Russian capital on Wednesday (local time). With Canada down early, Marc-Andre Gragnani and Wojtek Wolski delivered consecutive goals in the second period to salvage the victory. Forward Kim Sang-wook had both goals for Korea.

After surviving an early scare, Canada, featuring about a dozen former National Hockey League (NHL) players, outskated and outmuscled Korea the rest of the way. Only valiant efforts by Korean goalie Matt Dalton, who stopped 45 shots, made the final score close.

This is the last international tournament for Korea, coached by ex-NHL defenseman Jim Paek, before next year’s PyeongChang Winter Olympics. Korea earned an invitation as the host nation and will be making its Olympic debut on home ice.

And Wednesday’s meeting just might have offered a glimpse of what will transpire at the Olympics. Korea and Canada will face each other again in Group A action in PyeongChang. The Czech Republic and Switzerland are the two other teams in the group.

Korea gave up the opening goal about three minutes into the first period, but rallied with two unanswered goals by forward Kim Sang-wook in the same frame.

Matt Frattin put Canada on the board, after stripping defenseman Seo Yeong-jun of the puck behind the net and lifting a backhander past goalie Matt Dalton at 2:58 mark.

Some two minutes later, Kim knotted the score on a breakaway. Kim Ki-sung, his older brother, skated in alone on goalie Ben Scrivens for a shot, and Sang-wook, trailing on the play, was there to poke home the rebound.

Past the midway point in the opening frame, Canada took a firm control of the game, peppering Dalton with shot after shot. The Canadians ran their opponents into the ground with their cycling down low.

But Dalton and the rest of his team stood their ground, and took the lead with under three minutes left in the period on Kim Sang-wook’s second goal of the night.

After catching the Canadian defense flat-footed, forward Mike Testwuide snapped a low shot from the left point, and Kim, all alone at the top of the crease, deftly redirected the puck past Scrivens.

Visibly flustered to be trailing the heavy underdog, Canada kept pushing for an equalizer, and got one at 10:19 on the power play. After a face-off win, Gragnani sent a wrist shot through traffic and past Dalton, who never had a chance to make a save.

Less than two minutes later, Canada went ahead for good. Defenseman Mat Robinson made a fine outlet pass to Derek Roy, who then set up Wolski for a quick snap shot that made it 3-2 Canada.

Korean players appeared to run out of gas in the second period, as they expended their energy running around and chasing their opponents.

Korea played with a bit more jump late in the third period but couldn’t put another one past Scrivens.

Korea was awarded its first power play of the game with 1:53 left in the third, but lost the man advantage 10 seconds later when Park Woo-sang was called for slashing.

During the ensuing 4-on-4 situation, Korea pulled Dalton for an extra attacker, but Quinton Howden scored into the empty net to round out the scoring.

Korea will next face the world No. 4 Finland on Friday and Sweden, the third-ranked team and reigning world champion, on Saturday.