Can Moon get real?

Can Moon get real? 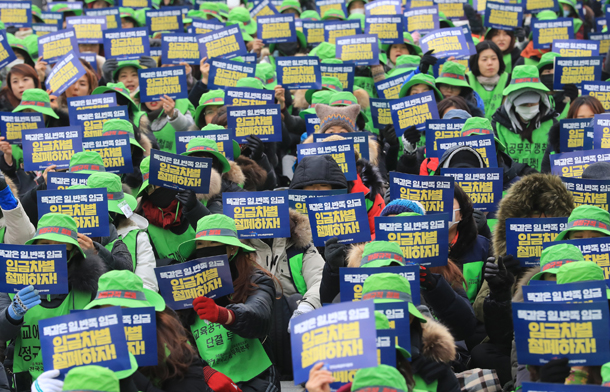 Nutritionists in school cafeterias stage a rally in Gwanghwamun, central Seoul, on Friday to demand the government scrap the contract worker system. [YONHAP]

Many may have had high hopes for a better society under a new government. A liberal president was elected when public disgruntlement was at its peak, following revelations of corruption of hideous proportions under the past government. The common man’s life was tough enough with a scarcity of decent jobs, killer rents in Seoul, and widening income disparities. How could he not hope for better?

But the common man’s hopes have been dashed. Have all the contract workers been put on permanent payrolls as they were promised? After the minimum wage went up, did jobs become secure? Have rents gone down? All the campaign promises turned out to be political rhetoric, hot air.

Over 6.7 million contract workers, including 46,000 part-time teachers, 10,000 contract workers for the Incheon Airport Corp. and 5,378 bakers and staff of bakery franchise Paris Baguette are hanging on Moon’s promise to leave no one on an irregular work basis by the time he leaves office in five years. But that promise won’t be fulfilled due to legal and financial reasons.

Another backlash comes from the minimum wage hike. Moon promised to push it up to 10,000 won ($9.20) an hour within the next five years to increase the incomes of low-wage workers. But the move has backfired. Youth unemployment has shot up to the worst level since the Asian financial crisis of the late 1990s. While jobs have become abundant in the United States and Japan, the real unemployment rate for people aged 30 or under in Korea hit 22 percent. Merchants are poised to cut back staff before wage costs jump by double digits next year while small and mid-sized companies are considering moving their factories overseas. Unemployment is bound to go up.

Moon’s real estate measures have also produced little or negative effect. Since May, the government has announced four sets of measures. They only helped to inflame astronomical home values in southern Seoul neighborhoods where there is always a shortage of supply. Some complain the measures only benefited the rich. Realtors explained that prices would inevitably go higher with tight supply and hot demand. The government is now thinking of upping property taxes. But that would only worsen inequalities in the real estate market and make home purchases more difficult for the common man. No governments in the past have won a battle with demand, whether on the stock market or real estate market.

The problem is J-nomics (J stands for President Moon Jae-in’s name), which is based on the idea that increased incomes will bolster economic growth. Such a policy requires enormous fiscal spending. Tax money must be spent to convert contract workers in the public sector to permanent status and increase the amount of public housing. The government has allocated 3 trillion won to subsidize smaller companies to be able to afford the spike in the minimum wage. To fulfill the action plans for J-nomics over the next five years, at least 178 trillion won is estimated to be needed. The country’s fiscal integrity will be challenged, and the bill will be handed down to the younger generation.

Such debt-financed growth can’t be sustained. It could work until local elections, to be held on June 13, as the ruling party will campaign that once bigger basic welfare payments to senior citizens and day care checks are handed out, consumer spending will increase and stimulate production. But a small-scale economy that relies on external trade won’t likely improve much on recovered spending.

Moreover, the government can miss its timing to restructure the economy for future growth if it is entirely engrossed in its pie-in-the-sky agenda. J-nomics pays no attention to structural reforms to enhance the competitiveness of exports. Government officials shrugged off advice from former German Prime Minister Gerhard Schroeder to take the initiative in reforms. Korea Inc. is falling behind its Chinese competitors.

The architects of J-nomics will not give up easily. The government is sanguine about its high approval rating and strong exports led by semiconductors. The Korean economy could become genuinely hopeless if it does not push structural reforms. Before it’s too late, the president must listen to conservative veterans on the economic front. It’s time to get real.