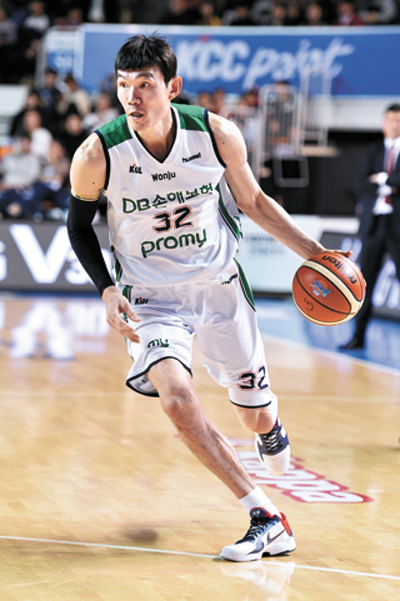 Kim Joo-sung of Wonju Dongbu Promy dribbles the ball during an away game against Jeonju KCC Egis on Dec. 9. [KOREAN BASKETBALL LEAGUE]

After 16 seasons in the Korean Basketball League, Wonju Dongbu Promy forward Kim Joo-sung said Monday that he would retire after the 2017-18 season. 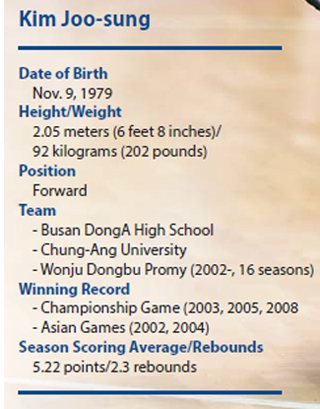 “I actually thought of retiring after this season,” Kim said. “I had a lot of thoughts going through my head after a disappointing season last year. I felt like I just couldn’t end it there.

“This season,” he continued, “the younger players are doing a great job leading the team. I got to announce my retirement with such a joyful mind-set.”

This season, the Promy are ranked third in the Korean Basketball League with 15 wins and eight losses, two games behind the leading Seoul SK Knights. Before the season, the Promy were considered the weakest team, but with work, they have become the KBL sensation this season.

Until Monday, Kim had been playing an average 12 minutes and 54 seconds per game, scoring 5.22 points and picking up 2.3 rebounds per game. To save his strength, Kim has only been playing in the second half of games this season.

“Our players are fearless on the court because they believe Kim Joo-sung has their back,” said Lee Sang-beom, head coach of the Promy.

Lee put Kim in charge of training the biggest men on the team before the start of this season.

Under his tutelage, Seo Min-su and Kim Tae-hong went from substitutes to starters.

“I told them to learn as much as they could from Kim Joo-sung,” Coach Lee said.

Since Kim made his league debut in 2002, he has been the Promy’s franchise star, playing solely for the team in the past 16 seasons. Although he is a native of the southeastern city of Busan, he has become the representative player of Wonju in the northeastern province of Gangwon. “I only have good memories of Wonju,” Kim said.

His career record ranks second in scoring at 10,124 points, 3,107 points behind Seo Jang-hoon, and is also second in rebounds at 4,366, once again behind Seo.

“Many people say we are competitors, but that’s not true,” Kim said. “Rather, I learned a lot from Jang-hoon.”

Kim may be second behind Seo in scoring and rebounds, but in blocks, he is dominantly in the lead with 1,028. He is the only player in the Korean Basketball League to exceed 1,000 career blocks, and he holds the record for most rebounds in a single game, picking up 11 rebounds during a game against the Incheon ET-Land Elephants in March 2004.

The 38-year-old forward has won the MVP award four times - twice in the regular season and two during playoffs - and his team won the Championship three times.

His achievements on the Korean men’s national team are equally notable. Since joining in 2002, he has helped them win gold at the 2002 and 2014 Asian Games and silver in 2010.

“Winning is our goal this season, but more than anything, I want to help the younger players develop,” Kim said. “Personally, I want to finish my last season without injuring myself.”

Although Kim does not have any post-retirement plans yet, he says he is sure he will stay in basketball.

“Since I’ve been doing this all my life, basketball is what I’m best at,” Kim said. “I’ll think about my post-retirement plan after playing the remaining games this season.”

The Promy has organized a retirement tour for Kim, starting with a home game on Jan. 1.

Players will have Kim’s jersey number embroidered on the left chest of their uniform and his number, 32, will be stamped on the court, inside the three point line.

The Korean Basketball League is planning its own special retirement ceremony for Kim.