Korean speed skater Lee Sang-hwa is now officially set for her pursuit of a third straight Olympic gold in the women’s 500-meter. 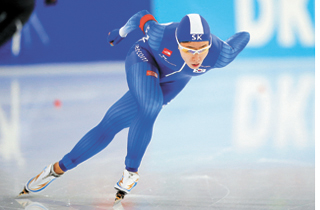 The International Skating Union (ISU) on Friday announced the skaters who qualified for the 2018 PyeongChang Winter Olympics. The event quota places were awarded based on results of the season’s first four ISU World Cup Speed Skating races.

The top 32 skaters ranked by their World Cup performances, with a maximum of three skaters per each country, booked their spots for the 2018 Olympics, and the announcement was a mere formality for Lee.

But Kodaira, 31, was unbeatable in that distance the past two seasons. She won all seven World Cup 500-meter races this season, while Lee settled for five silvers and a bronze.

Kodaira went undefeated in eight World Cup races in the 2016-2017 season, while also capturing both the world single distance championship and the world sprint championship in the 500-meter.

Lee is joined by two other Koreans, Kim Min-sun and Kim Hyun-yung, in the 500-meter.

Lee has also qualified for the 1,000-meter as the 20th-ranked skater, but the 500-meter has always been her main event.

Lee, 29, is the 2010 Olympic gold medalist in the 10,000-meter and won silver in the 5,000-meter at the same event, but the mass start is his main race now. He is the reigning World Cup overall champion and also ranked No. 1 after four World Cups this season.

Lee led Korea to a team pursuit silver medal in 2014 and will once again be a leader, this time with two high school students, Kim Min-seok and Chung Jae-won.

Among other notables, Mo Tae-bum, a surprise 500-meter champion at the 2010 Olympics, qualified for that event in Pyeongchang. Mo, 28, has fallen on hard times in recent years and will look to recapture some of his old magic next February.

In all, Korea has qualified for 11 of 14 speed skating races on home ice.