A tough road ahead

A tough road ahead 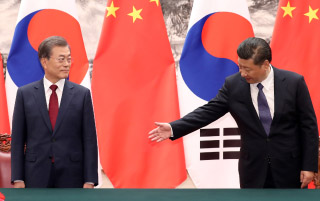 Chinese President Xi Jinping invites Korean President Moon Jae-in to take a seat before signing several memoranda of understanding at the Great Hall of the People in Beijing on Thursday. [JOINT PRESS CORPS]

President Moon Jae-in had his third meeting with Chinese President Xi Jinping last week, but the outcome was announced through separate media briefings instead of a joint statement, a result of external factors like the South Korea-U.S. alliance and issues related to Japan, reunification and North Korea, not to mention the row over Thaad.

At the meeting, South Korea and China went back to the basics of international cooperation, adjusting policies for mutual interests, agreeing on major issues and creating a general outlook on Seoul-Beijing relations.

First, the two leaders agreed that improved inter-Korean relations can help resolve issues on the peninsula, and that peaceful and diplomatic solutions are important. Seoul and Beijing share the view that they ought to participate in sanctions against North Korea with the goal of having dialogue with Pyongyang.

The two countries believe improving inter-Korean relations will bring policy synergy, especially under the circumstance that a proposal to suspend South Korea-U.S. military exercises in exchange for a North Korean weapons freeze ends in deadlock.

Now that North Korea has declared itself a nuclear-armed nation, China and South Korea believe it is necessary to prepare for the moment that Pyongyang returns to the negotiating table after creating tension through low-intensity provocations. That is why Seoul stressed “more cooperation” with Beijing instead of asking for “more sanctions” to solve the problem.

In the process, South Korea made it clear that additional Thaad batteries will not be deployed. Moon also said during his visit that relations with China would not be shaken by external factors. China, too, has been seeking an exit strategy since the Moon administration began, as all South Korea-China issues boil down to Thaad.

Third, since the establishment of diplomatic ties with China, South Korea’s relationship with its neighbor has developed in every way. But when high-level relations are shaken, economic and cultural exchanges suffer. Political and security risks turn into economic risks.

It was meaningful to find clues that China might end its economic retaliation over Thaad, including the signing of seven memoranda of understanding with great potential in the economic, trade, energy and health care realms, and the establishment of a hotline during crises.
But in order to not repeat the foolish mistake of paying tremendous diplomatic costs, the two countries need to operate a feasible and substantial mechanism for two-way, future-oriented and sustainable strategic talks.

Through the summit, South Korea and China succeeded in breaking the ice, but also confirmed that there are still many obstacles. While the discord over Thaad can be “mended,” it is hard for the relationship to go back to the good old days. The summit has confirmed that the risk of relapse is serious.

As the bilateral relationship progresses, it is hard to prevent all problems, and both countries have become more sensitive to public opinion, shrinking the room for strategic cooperation. As China made it clear that its policies on the Korean Peninsula would not follow the United States, the push-pull relationship between Washington and Beijing will likely be projected onto the Korean Peninsula.

But it is not desirable to rush progress in our relations with China. All leaders need to have strategic wisdom to bring crises under control. The Moon administration must not proclaim that the summit accomplished 120 percent of its needs, and its policies toward China should be subject to fine-tuning.

*The author is a professor of political science at Sungkyunkwan University and director of the Sungkyun Institute of China Studies.