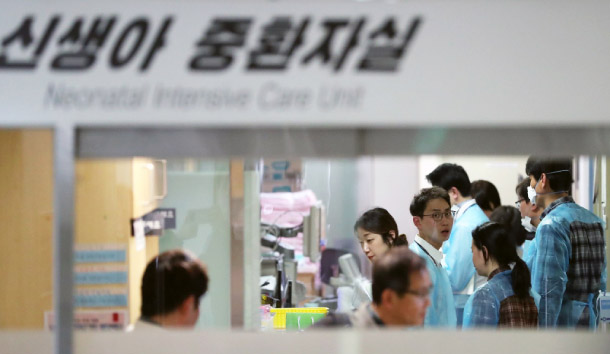 Authorities raided the Ewha Womans University Medical Center in Seoul on Tuesday, where four infants died of cardiac arrest within a two-hour span on Saturday.

The police confiscated incubators, suction devices, syringes, IV bags and lines, additional charts and other medical devices from the intensive care unit for newborns at the hospital in Yangcheon District, western Seoul. They are to be sent to the National Forensic Service to see whether they carry any germs.

The Korea Centers for Disease Control and Prevention (KCDC) said on Tuesday that it found Citrobacter freundii, a type of gram-negative bacteria, in the blood of three out of the four infants. The KCDC is running a genetic analysis on the bacteria to see if they are all the same type.

“The KCDC suspects that the bacteria found in the three infants are resistant to antibiotics,” it said in its press release. “We will know after the genetic test. But we cannot confirm yet that the bacteria caused the deaths.”

Media reports have questioned whether the possible abuse of antibiotics could have made the bacteria antibiotic-resistant, as well as whether the infants were cared for in a hygienic environment.

“Four infants among the remaining 12 were also found to be carrying rotavirus,” the KCDC said.

“I saw the nurses changing the diapers of babies with bare hands,” a parent of one of the infants treated at the intensive care unit at the Ewha hospital told JTBC.

“The nurses would leave pacifiers out in the open, which made me wonder if that was safe,” said a father of one of the baby girls who died.

Her twin brother, who was originally in the same intensive care unit, was moved to another hospital. He tested negative for rotavirus.

“Sometimes I saw the nurses not wearing sanitary gloves,” he said. “What makes me angry is that the hospital told the media that these infants had serious underlying illnesses. That’s not true. They were in the intensive care unit because they were born prematurely. They weren’t seriously ill.”

Some questioned whether the hospital responded effectively to the deaths. Ewha Womans University Medical Center was found to have not called either the police or the public health center after the deaths.

A parent of one of the dead infants called the police on Saturday night. The police then informed the public health center in Yangcheon of the deaths two hours later.

Hospitals are required to report to the district public health center when there is a series of deaths. Police will be questioning and investigating 11 medical staff members at Ewha hospital, including two doctors and five nurses.

The funeral for the four infants who died on Saturday was held on Tuesday.

The results of the autopsies, conducted on Monday, will be released in a month, said the National Forensic Service.