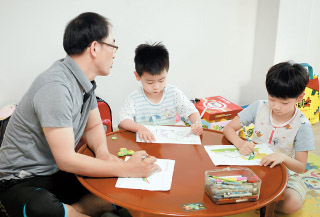 An employee of KT&G currently on child-care leave plays with his children. KT&G supports work-life balance through its welfare policies such as paternity leave. [KT&G]

KT&G is leading the charge when it comes to maternity and child-care leave policies. The company has created an initiative to allow parents to freely take advantage of the policy.

In the second year, the company increased that amount to 2 million won. Additionally, the company extended child-care leave from 1 year to 2 years.

With maternity leave, a maximum of a year may be requested for leave from when a pregnancy is confirmed until birth. When child care and maternity leaves are used together, a maximum period of 3 years per child can be used.

The company has put in a great deal of effort to relieve the burden of work for employees returning from leave. KT&G has employees return to the same position that they held before the leave and their absence does not affect their personnel evaluations while they are away from the office.

“A happy family is the foundation of a desired workplace,” said an official at KT&G. “We will continue to strive for work-family balance through various welfare policies for our employees.”