The Hanwha Eagles are among the biggest spenders in the Korean baseball league, but they are also consistently the poorest-performing, finishing in the bottom half of the KBO in the past five seasons. 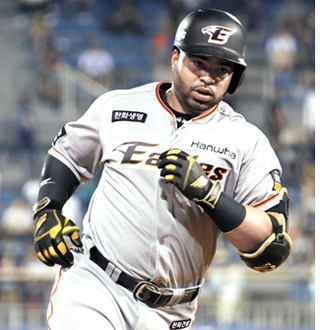 Their penchant for dropping millions to recruit heavy hitters from abroad has barely borne any fruit. Last year, they signed three foreign players - Alexi Ogando, Carlos Villanueva and Wilin Rosario - for a total of $4.8 million. Of the three, only Rosario performed.

Despite the high expectations and exorbitant investment, Ogando and Villanueva frequently found themselves excluded from the roster due to injuries. The heavy investment with little return was a sobering lesson for the Eagles that money cannot always buy a good team.

For next season, the Eagles are focusing on the long game. They plan to spend less money on power players and more time on developing their youngest players.

“I’ll make a team that could compete for a championship victory within the next two to three years,” Eagles manager Han Yong-duk said.

In 2017, the team ranked first in average annual income of their top 27 players, at 341.6 million won ($317,890). To avoid past mistakes, the Eagles are signing younger players and spending about half of what they did last year on foreign players.

The Eagles have also released a majority of their veteran players. Although many of them could play for another year or two, the decision was made to give more opportunities for younger players and save money.

Previously, the Eagles relied heavily on their relationship with players. Even when they failed to meet expectations, they rarely saw a pay cut. In 2013, when the Eagles finished last in the league for a second consecutive season, only two out of 48 players that re-signed suffered a pay cut. And despite their seventh-place finish in 2016, 29 out of 78 players re-signed with a higher contract while 34 players signed with the same contract and 15 faced a slight pay cut.

But this year, the Eagles are making significant changes to their roster. Outfielder Lee Yong-kyu signed with the Eagles for another year, but he had to take the biggest year-to-year pay cut in the KBO, from 900 million won to 400 million won. Lee accepted the pay cut without hesitation, since he will earn free agent status after the 2018 season, but the pay reduction of half was a surprise.

Not only that, the Eagles reduced raises for players that played well, in consideration of the team’s overall performance. Currently, the Eagles’ three free agents - Jeong Keun-woo, An Young-myung and Park Jung-jin - are willing to sign for a couple more years, but the club plans to only keep them short-term.

“We plan on minimizing the incentives based on their result to avoid possible conflict between the coaching staff and players in playing time,” said Suk Jang-hyun, head of the Eagles’ operation team.

“Since we haven’t been playing well, it’s hard to meet the requirements of players,” Eagles general manager Park Jong-hoon said. “Just like with Lee Yong-kyu, we need to approach players with a business standpoint at times.”

Clubs across the KBO can expect changes in the way they negotiate with players. After the 2018 season ends, the KBO will allow players to have agents negotiate for them.

Free agents and players who have returned from foreign leagues already employ agents, but the KBO will extend the benefits to all players.