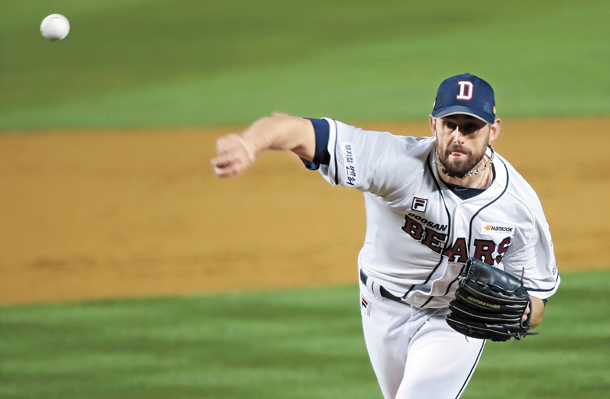 Dustin Nippert, formerly of the Doosan Bears, throws a pitch during the fifth Korean Series Game against the Kia Tigers at Jamsil Baseball Stadium on Oct. 30. Nippert will play for the KT Wiz starting this season. [YONHAP]

The KT Wiz signed a one-year contract with Dustin Nippert worth $1 million on Thursday. Though the Doosan Bears showed Nippert the door, the all-star player is back on track to become the first foreign pitcher in the KBO to achieve 100 career wins.

In addition, Nippert won the KBO’s MVP award and the Golden Glove award in 2016 after picking up the most number of win at 22, the highest winning percentage at 0.880 and the lowest ERA at 2.95.

“Aside from his ability as an ace pitcher, we chose Nippert because his adaptability to the KBO, personality and work ethic has been proven,” said the Wiz’s general manager Lim Jong-taik.

When the Bears initially announced they were releasing Nippert, the Wiz repeatedly denied being interested in the 36 year-old pitcher.

“At the time, the players we planned on signing were postponing their decision in whether to stay in the majors or join the Nippon Professional Baseball league, so we didn’t have much time,” Lim said.

“Considering the time needed for the spring camp and prepare for the season, we looked at possible candidates, including Donn Roach, but came to the decision that Nippert will play the biggest role in strengthening the team’s strategy.”

One of the biggest reasons for Nippert’s unpopularity, despite his historic success in the KBO, is his poor performance in the 2017 season due to an injury. In addition to Nippert’s injury, his age also concerned the clubs.

“The player showed the intention to play for the Wiz and, considering his statistics in the 2017 season, where he picked up 14 wins while throwing 179 and two thirds innings, I expect him to play a role in helping the team move up in the standings,” Lim said.

This isn’t the first time the Wiz has signed a foreign player who was released by another KBO club. Nippert is the Wiz’s fifth foreign player since the team joined the KBO in 2015. Chris Oxspring is the only player in the Wiz’s history to have picked up two-digit wins in a single season. Oxspring joined the Wiz after playing two seasons with the LG Twins and another two seasons with the Lotte Giants. Once he joined the Wiz in 2015, Oxspring picked up 12 wins and ten losses with a 4.48 ERA.

The addition of Nippert has allowed the Wiz to add more depth to their pitching rotation, as the Wiz re-signed Ryan Feierabend at $1.05 million.

Feierabend joined the Wiz in the 2016 season, after being released by the Nexen Heroes, and the team benefited a lot from the 32 year-old pitcher. Though the Wiz finished in last place, Feierabend still managed to have the lowest ERA in the KBO, at 3.04 for the season.

The two pitchers have their own style of play. Nippert seems to have lost control in his pitch, heading into his late 30s, but when it comes to his fastball, batters still struggle. Despite his age, Nippert throws pitches at a speed of 150 kilometers (93 miles) per hour.

Feierabend likes to fall back on his knuckleball. Normally, due to the inconsistent curve or landing point, even catchers struggle with knuckleballs. But Feierabend has shown great control in his knucklers.

While the Wiz has proven successful by signing foreign players from other KBO clubs, they’ve not so good at finding their own.

Donn Roach was the best they ever recruited from overseas, and he only picked up four wins and 15 losses with a 4.69 ERA. The other pitchers all struggled with an ERA of 5.00 or above.

This may be the reason why the Wiz has once again decided to find a foreign player with KBO experience. This season the Wiz may finally be in with a chance of moving out of the bottom spots with the addition of Nippert, Kang Baek-ho and Hwang Jae-gyun.