Ambitious slate of movies ahead in 2018: Local film industry looks to build on the success of December’s releases

Ambitious slate of movies ahead in 2018: Local film industry looks to build on the success of December’s releases 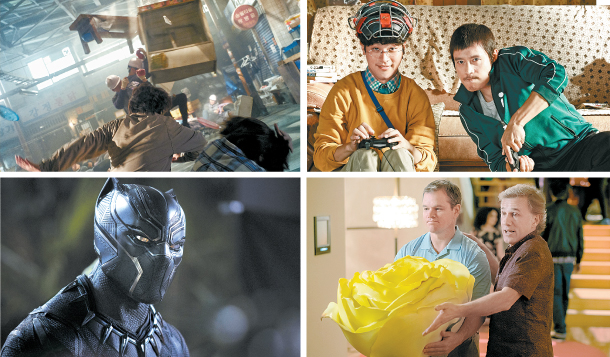 Movie distributors are brimming with films that will excite moviegoers throughout the year. Clockwise from top left are “Psychokinesis,” “Keys to the Heart,” “Downsizing” and “Black Panther.” [NEW, CJ ENTERTAINMENT, LOTTE ENTERTAINMENT, WALT DISNEY COMPANY KOREA]

Bucking expectations, the number of movie tickets sold last year jumped by 2.84 million year-on-year. Thanks to three Korean blockbusters unveiled in December - “Along With the Gods: The Two Worlds,” “1987: When the Day Comes,” “Steel Rain” - last year’s seemingly bleak box office performance surged to a total 219.86 million, the highest in record. Among the three, the ticket sales for “Along With the Gods” was particularly surprising after having reached 10 million only two weeks after its release.

With hopes of becoming the next box office success, major distributors are preparing to release ambitious lineups of films this year.

(Many of the film titles listed are direct translations of their Korean names. When released, the movies may have different English titles.)

The first film from the nation’s largest distributor CJ Entertainment is “Keys to the Heart.” The comedy, starring Lee Byung-hun, Park Jung-min and Youn Yuh-jung, centers on a washed-up boxer (Lee) who one day learns that he has a younger brother (Park) with savant syndrome. The film opens on Jan. 17.

CJ’s lineup also includes “Golden Slumber,” a Japanese novel adaptation revolving around a parcel delivery man (Gang Dong-won) who is falsely framed as the person behind the assassination of a presidential candidate; an espionage film titled “Operation,” about a South Korean spy agent (Hwang Jung-min) in the mid-1990s who infiltrates North Korea to learn about its nuclear development; and “Marital Harmony,” which tells the story of Princess Songhwa (Shim Eun-kyung), who refuses to marry a man her family has chosen, and a matchmaker (Lee Seung-gi) who connects potential partners based on their compatibility.

Coming off the success of 2017’s biggest-selling film, “A Taxi Driver,” Showbox will release the third part of the “Detective K” franchise in February. Set in the Joseon Dynasty (1392-1910), Kim Myung-min will once again play Detective K and Oh Dal-su will play his sidekick.

Showbox will also release “Inside Men” director Woo Min-ho’s next feature “Drug King.” One of the most anticipated films of the year, the crime drama is based on a drug dealer (Song Kang-ho) in Busan and a lobbyist (Bae Doo-na). It will be the first time for the two actors to work together since “The Host” (2006). Other releases on Showbox’s slate include “Money,” about an aspiring young stockbroker (Ryu Jun-yeol) who finds himself caught up in a stock market scam, as well as the thriller “Murder of Man or Woman.” It follows the face-off between a detective (Kim Yun-seok) and a serial killer (Ju Ji-hoon) who confesses to committing seven murders while imprisoned.

Next Entertainment World (NEW), which celebrates its 10th anniversary this year, will begin the year with “Psychokinesis,” coming later this month. Directed by Yeon Sang-ho, who was behind the box office hit “Train to Busan” (2016), the comedy centers around a father (Ryu Seung-ryong) who sets out to save his daughter (Shim Eun-kyung) and others around him with his newly-discovered superpowers. The film has been picked up by the streaming giant Netflix.

NEW will also release “Drug War,” which explores the story of a drug ring boss (Kim Joo-hyuk) who gets chased down by a detective (Cho Jin-woong) that teams up with a gang member (Ryu Jun-yeol). It stars the late actor Kim Joo-hyuk, who died in a car crash in October. Another film, “Herstory,” depicts the true story of the 10 female plaintiffs during the trials of Shimonoseki, from 1992 to 1998, which ended in a partial victory against the Japanese government. It stars Kim Hee-ae and Kim Hae-sook. Period epic “Ansi Fortress” will be NEW’s tent-pole movie of the year. Starring Zo In-sung and Nam Joo-hyuk, the big budget movie depicts the Siege of Ansi, the 88-day war between Goguryeo and the 500,000-member army of Tang who attempted to take over the Ansi Fortress.

Lotte Entertainment, which is currently relishing in the success of “Along with the Gods,” has filled up this year’s lineup with “Heungbu,” which revisits the Korean traditional folktale “Heungbujeon,” and the comedy “Wrestler,” which centers on a former wrestler (Yoo Hai-jin) and his son (Kim Min-jae), a rising star. “Heungbu” will arrive in theaters during the Lunar New Year holidays on Feb. 15-17. The film also features Kim Joo-hyuk.

Romantic drama “I’m on My Way to Meet You,” an adaptation of a Japanese novel of the same title, will diversify Lotte’s lineup. The movie is about a woman (Son Ye-jin) who makes the seemingly impossible promise to her husband (So Ji-sub) before she passes away to return a year later on a rainy day.

Above all, the second part of “Along With the Gods” will be one of the year’s most anticipated releases.

Thanks to the surprise performances of crime movie “The Outlaws” and historical period “Anarchist from Colony,” Megabox Plus M had a strong 2017. This year, the distributor aims to take a bigger leap with director Lee Joon-ik’s “Byeon San,” about a rapper (Park Jung-min) who returns to his hometown and reunites with his elementary schoolmate (Kim Go-eun), and “Little Forest,” about a woman (Kim Tae-ri) who returns to the countryside after feeling exhausted by city life.

Celebrating the 10th anniversary of the Marvel Cinematic Universe, Marvel will present “Black Panther” in February and “Avengers: Infinity War” in the spring. Other superhero movies on the calendar include “The New Mutants” (April), “Ant-Man and the Wasp,” “Deadpool 2” and “Aquaman.”

Steven Spielberg’s sci-fi flick “Ready Player One,” Tom Cruise’s action classic “Mission: Impossible 6” as well as Matt Damon’s comedy drama “Downsizing” and Disney-Pixar’s heartwarming “Coco,” both of which are set to arrive in theaters on Thursday, are a few other movies that will hopefully diversify genres offered to local audiences this year.