A dollar was all that the Hanwha Eagles paid to the Los Angeles Angels as its transfer fee to acquire outfielder Jared Hoying. 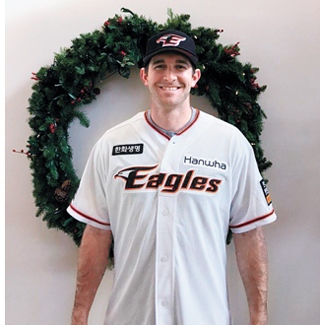 Normally, when KBO clubs sign a foreign player with major league experience or who was included on an MLB team’s 40-man roster, they are required to pay a large transfer fee to the former club. Transfer fees usually exceed $500,000 and some the foreign pitchers who played in the KBO last season had transfer fees that exceeded $1 million.

The Eagles’ success behind signing Hoying at a transfer fee of a dollar is the result of a perfect arrangement between the club and the player. Knowing that he would become a free agent at the end of the 2017 MLB season, Hoying was on the hunt for a team to join. Upon completion of the season, he made a verbal agreement to sign with the Eagles.

However, as the Eagles had yet to make a decision about the future of first baseman Wilin Rosario, who hit 37 home runs for the team in 2017, they asked Hoying to wait.

After Rosario signed with the Hanshin Tigers of Nippon Professional Baseball, the Eagles were able to proceed with signing Hoying. Though the Eagles were not required to pay a transfer fee for Hoying thanks to the stipulations in his minor league contract, the Eagles paid a dollar for “symbolic reasons.”

The symbolic transfer fee occurs quite frequently. In 2009, Choi Hyang-nam, formerly of the Lotte Giants, made an attempt to play in the United States.

Since he was three days short of being a free agent, Choi agreed to sign a contract with the St. Louis Cardinals through the posting system. Under the approval of the Giants, the Cardinals successfully added Choi to the roster for $101.

Similar instances have also occurred in football. In 2005, Hao Haidong, a former member of the Chinese national football team, transferred from Dalian Shide to Sheffield United. As Dalian was well aware of Haidong’s desire to experience the English Premier League Dalian allowed Haidong to join Sheffield for one pound.

The record for lowest transfer fee in the English Premier League is the one euro Chelsea F.C. paid to Dutch team PSV Eindhoven for Brazilian defender Alex in 2007.