When the PyeongChang Winter Olympics open in Gangwon next month, nearly 25,000 volunteers will be working behind the scenes for almost free. 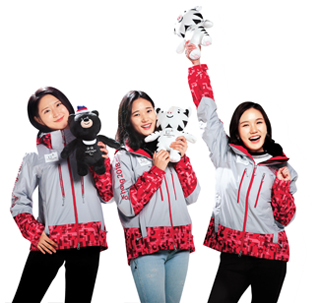 Three volunteers for the 2018 PyeongChang Winter Olympics pose for a photo. [KIM KYUNG-ROK]

The volunteers, who will be compensated with meals and discounts on transportation, represent more than a quarter of the staff running the Games, and as the event draws near, there is growing concern that some of them might not even show up.

The PyeongChang Organizing Committee for the 2018 Olympic and Paralympic Winter Games started receiving applications for volunteers in July 2015 and made final selections in April last year. There were about four applicants for every spot, and 70.5 percent of the volunteers are female, a majority of them in roles that require a language other than Korean.

Most of the volunteers are young, with over 80 percent in their 20s or lower. The youngest volunteer is 16 and the oldest, Yim Kyung-soon, is 88. Yim was the first alpine skier to represent Korea at the Winter Olympics, at Squaw Valley, California, in 1960.

Seoul is sending the most volunteers, at 6,602, while the province of Gangwon, where the Games are taking place, is sending 2,862.

In addition to Korean volunteers, the committee recruited 1,090 people from 62 countries to help out.

Despite the massive pool of recruits, there is growing concern that some of them might be no-shows because of limited support from the Olympic committee.

“At the 2014 Incheon Asian Games, our transportation costs were covered,” one volunteer said. “But this time, we have to cover them at our own expense. A number of volunteers have to stay in Gangwon for a month, taking a leave from their jobs. There will be quite a lot of spending.”

There is also less hype for the PyeongChang Games compared to the 1988 Summer Olympics in Seoul, where 27,000 people volunteered.

No penalties are levied against volunteers who don’t show up without prior notice. The Rio Olympics suffered international embarrassment after thousands of volunteers quit in the middle of the Games because of long hours and lack of food.

Other than travel expenses, volunteers have been griping about the uniform, saying it won’t be warm enough for them to survive the bitter Gangwon cold in February. Many volunteers assigned to outdoor tasks like managing parking, checking tickets and providing security have complained about their posts, saying “We can’t work because it’s too cold” and “This isn’t what I signed up for.”

The Olympic committee has since hired part-time workers to fill those roles because of volunteers’ refusal to take them.

“Of the volunteers, we have assigned 74 percent of them to positions,” the PyeongChang committee said. “In case the volunteers don’t show up, we have recruited 114 percent more people than we need, and in anticipation of poor working conditions, we are considering shortening the volunteer time and hiring additional volunteers so they can rotate.”

Aside from assignments in Pyeongchang and Gangneung, the site of the Games, some volunteers will work at Incheon International Airport to greet athletes and delegations. Volunteers assigned to helping visitors find accommodations and deal with other lodging-related inquiries started working on Jan. 2.

After the Olympics, volunteers are allowed to keep their uniform and a watch as souvenirs.