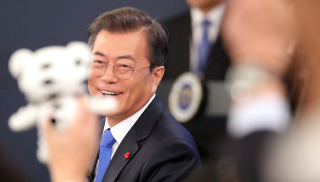 President Moon Jae-in smiles at an Olympic mascot waved by a reporter during a New Year’s press conference Wednesday. [YONHAP]

Five American wrestlers were met with an overwhelming response when they appeared at the Tehran airport on Feb. 14, 1998. They were the first U.S. sports team to come to Iran since Washington and Tehran cut diplomatic ties after Iranian militants seized hostages at the U.S. Embassy in 1979 following the Islamic Revolution. A crowd of over 200 Iranian reporters competed to cover the Americans’ arrival in the nation. The event opened a small door for other sports and cultural exchanges with the Middle Eastern country under President Mohammad Khatami, who desired improved ties with the United States.

The U.S. team carrying the Stars and Stripes was greeted by thunderous applause in the 12,000-seat Azadi sports arena in a country where wrestling was as popular as table tennis is in China. Politics did not matter at that moment. Four months later, the two countries were pitted against one another at a preliminary match of the 1998 World Cup in France. When Iran’s team won the game, Supreme Leader Ayatollah Ali Khamenei proclaimed that the Iranians had dealt a bitter defeat to their arrogant enemy.

Yale University Professor Michael Rubin, author of “Dancing with the Devil: The Perils of Engaging Rogue Regimes,” says that no international sports event has ever turned a foe into a friend. A sports match can warm the hearts of the public at a particular moment, but the overall sentiment does not change as long as the leadership considers the other an enemy.

What will come out of Tuesday’s high-level inter-Korean talks, taking place amid simmering war talk with the speculation that North Korea is near to perfecting nuclear warhead-tipped ICBMs, capable of striking the U.S. mainland and much of the rest of the world?

The two Koreas competed in the World Table Tennis Championships in April 1991 in Chiba, Japan, as a single team for the first time. Their team name bore the name “Corea” and carried a neutral flag outlining the Korean Peninsula. A few months later, Pyongyang bolted from the nuclear Non-Proliferation Treaty and launched full-fledged nuclear weapons development.

In February 2006, South and North Korea marched in the opening and closing ceremonies of the Torino Winter Olympics again under a single national name, Corea, and under a neutral flag. Five months later, North Korea fired off seven missiles, including a long-range Daepodong 2, in a show of force. Three months afterwards, it carried out its first nuclear test.

In a nutshell, North Korea used sports exchanges and cooperation with South Korea as a means of putting Seoul off guard on the security front. Not once did it give up its nuclear ambitions. A reconciliatory tone in a New Year’s address by the North Korean leader has become a kind of ritual. Kim Jong-un indicated a willingness to improve ties with Seoul in his New Year’s speeches in 2015 and 2016. But in 2015, a mine planted by North Korea along the tense border critically injured South Korea soldiers. In 2016, the recalcitrant country conducted its fourth nuclear test. As it was with Iran, the North Korean leadership did not change.

Seoul must not be so naïve as to believe the reassurance of U.S. President Donald Trump that he backs inter-Korean dialogue 100 percent. Trump boasted that his tough stance had helped build the momentum for dialogue. But if things do not turn out well, Trump will likely say, “Fools! I told you so.” It is highly risky to think that Seoul will get away with it if it bends international sanctions. Washington learned a lesson from the betrayal of Khamenei: Don’t trust a rogue regime.

Pyongyang will let Seoul indulge itself in the driver’s seat, while it sits back for a free ride toward its goal of putting an end to joint Korea-U.S. military drills and receiving coveted recognition as a nuclear power. We must ensure that we host the Olympics successfully and safely. But that cannot be our final goal. If our attention is diverted, we may find ourselves far away from our destination of denuclearizing North Korea.

We must not let emotions override us and fall for the North’s sweet talk and charm offensive. We are in the driver’s seat anyway. We must remember where we want to end up.

*The author is Washington bureau chief of the JoongAng Ilbo.