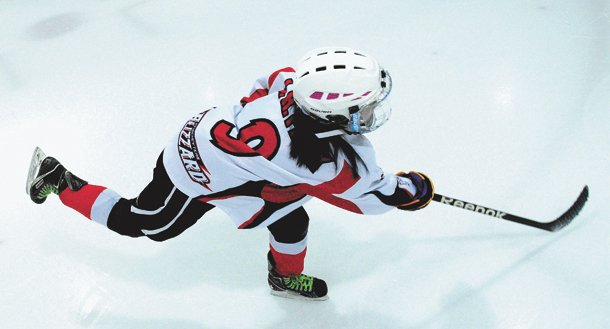 Violinist Park Ji-hae belongs to an amateur ice hockey team. She says she wants to share the excitement behind winter sports as an ambassador of the 2018 PyeongChang Winter Olympics. [HAEWA JHP]

When violinist Park Ji-hae leaves home for a performance, it’s not only her 1735 Petrus Guarneri violin that she carries in her arm. In her other hand, she is often carrying a hockey stick. The 32-year-old German-born violinist belongs to an amateur ice hockey team in Seoul and says the sport that she started as a way to relieve stress and depression has become the second most important activity in her life. That is why she jumped for joy in November when she was named one of the honorary ambassadors of the upcoming 2018 PyeongChang Winter Olympic Games.

But even before being selected as one of the Olympic envoys, Park was so passionate about the event that she personally made a three-minute video clip showing her playing the violin while figure skating to the famous tune of Arirang, as well as scenes of her playing ice hockey, in efforts to promote the event.

“I wanted to show people that a skinny girl like me can also enjoy winter sports and even play one,” she said.

To mark 50 days until the opening of the PyeongChang Winter Olympics, the event’s organizing committee invited Park to perform once again at an ice rink in Olympic Park, eastern Seoul. There, she played “White Jeongseon Arirang,” which she had rearranged to promote the games. Arirang is Korea’s most well-known folk song and Jeongseon Arirang is one of the many Arirang tunes that originates in Gangwon, where the upcoming games will be held.

The violinist has many ideas and events planned as an ambassador of the upcoming Olympics. The Korea JoongAng Daily sat down with her on Monday to learn more about what will be keeping her busy during the Games. The following are edited excerpts from the interview. 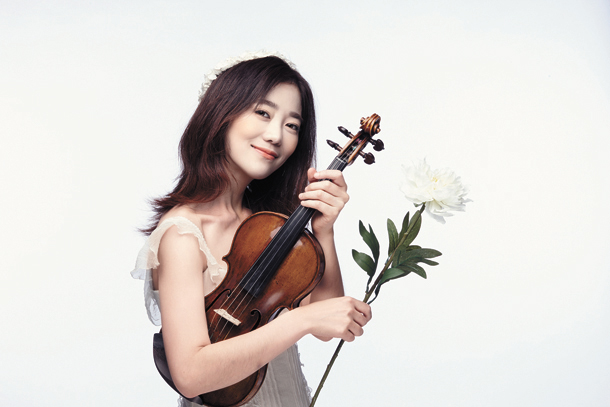 Q. How was playing the violin while figure skating in front of an audience?

A. I was so nervous. When I did it to create the video clip, it was okay because you can always edit it. But, doing it again live, I was really nervous that I couldn’t do all the twirls and jumps I had practiced. Also, I had to wear figure skates - I’m more used to skating in hockey skates. But it was really fun as well. I clenched my teeth and successfully put on the show, only wishing that more people would become interested in the upcoming games by watching me, a violinist who looks like she has nothing to do with winter sports or ice hockey, enjoy it so much. I also rearranged the folk song Jeongseon Arirang so that listeners could feel the energy and passion that will be present in Pyeongchang starting next month.

Growing up in Germany, I was exposed to a lot of winter sports. While I was going through a bit of ennui playing the violin, I wanted to get more involved in winter sports. I first tried figure skating, but on the first day, I tripped and broke my elbow. As a violinist, I thought I needed to play a safer sport and that was ice hockey. Because ice hockey is a team sport, I experienced the team spirit and learned how to keep in step with others. 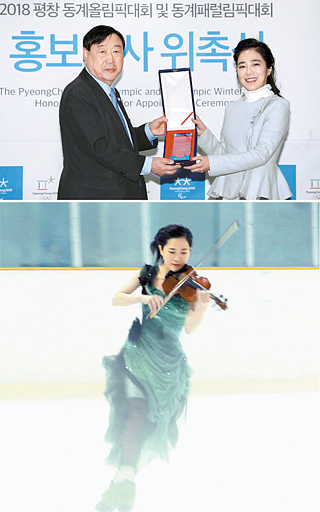 Top: Park receives a plaque from Lee Hee-beom, left, head of the 2018 PyeongChang Winter Olympics organizing committee, after being named the event’s honorary ambassador. Above: Park plays “White Jeongseon Arirang,” which she rearranged to promote the upcoming Winter Olympics, while figure skating to celebrate 50 days until the event. [HAEWA JHP]

As an honorary ambassador, what are some of the events you have in mind?

I don’t know why, but as a concert violinist, so many opportunities where I have to deliver a speech and play the violin came to me, like the TED Talk I did in 2013. I was also invited to perform and talk at the renowned ZEIT Economic Forum held in Hamburg, Germany, last year. Pianist Lang Lang and I were the only musicians to be invited to the forum. I got invited again this year so I will be talking about the rich culture of Korea and link it with the Olympic Games as well. Next month, I plan to visit military camps in Korea and perform and deliver talks about myself, music and the PyeongChang Winter Olympic Games. Right now, there are so many cultural events lined up to celebrate the Olympics, but the young Korean men who will be responsible for national security during the games are missing out on the fun.

Even classical artists with big agencies have difficulty filling up concert halls. But it seems so easy for you, even without the help of strategic promotional activities. How is that possible?

I am just so thankful. I personally think that it is because I don’t really worry about the result. I perform and deliver talks. I am a violinist who plays a musical instrument, but I consider myself as an instrument who can sympathize with the people of today. That is why I talk a lot about the dark times when I fell into bouts of depression and how I learned to get out of it through music and sports.