For Ji Eun-hee, a long slump seems over for good

For Ji Eun-hee, a long slump seems over for good

Ji Eun-hee made headlines in October when she won the Swinging Skirts LPGA Taiwan Championship, holding off a formidable Lydia Ko and ending an eight-year title drought. 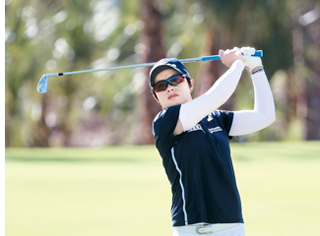 The 31-year-old golfer is one of the oldest on the LPGA Tour, but she still gets as nervous as any player.

“Throughout the week of Swinging Skirts, I couldn’t sleep,” Ji said. “Since Lydia Ko, the runner-up, is a great player and I hadn’t been in the lead for so long, I was worried that I would lose my opportunity.”

Despite the anxiety, Ji finished the tournament six shots ahead of Ko, the youngest golfer to ever be ranked No. 1 in the world.

Even before turning professional, Ji was already a notable golfer in Korea for her amateur career on the national team.

She turned professional at age 18, through the KLPGA Tour, in 2004 and joined the LPGA Tour three years later. She picked up her first tour win at the Wegmans LPGA in her second season. After winning the U.S. Women’s Open in 2009, it seemed as if Ji was going to be the next Korean golfer to top the world ranking, but instead, a swing change sent her into a long slump.

Ji took a lot of criticism for changing her swing while she was playing well.

“I went through a swing change after the 2009 season and it led to a poor result starting in 2010,” Ji said. “It drove me crazy when I didn’t play well in tournaments, because I was doing fine in practice.”

Though it took her eight years to adjust to the new swing, Ji never considered going back to her old one, and it paid off at Swinging Skirts.

“When other players came out to the putting green and splashed water on me after the round, I got emotional,” she recalled. “I had a hard time but I think it was a good decision to go through a change, having a swing that will allow me to have a long-run on the Tour.”

In addition to her swing change, Ji, unlike other golfers, did not have a club sponsor other than her driver. She believes it is important to play with a set of clubs that fits her best rather than receiving them for free.

“Realistically, club sponsorship is not worth much,” Ji said. “Personally, rather than getting stuck with one brand of equipment, it’s better to find clubs that fit you perfectly after trying different brands.”

This may be Ji’s own technique for consistent performance on the LPGA Tour. She has been able to maintain her tour status for over 10 consecutive seasons, not an easy thing to do. Now, she is heading into her 12th season on the LPGA Tour.

“I always like to tell younger players that if they really like golf, then hang in there,” Ji said. “Today, I see a lot of people trying different things if they don’t work out, but if you hang in there, good things will happen. It’s lonely and difficult to live in the United States, but once you play well in a tournament, you forget about all that.”

Pak Se-ri currently holds the record for being the oldest Korean golfer to win an LPGA Tour event, the 2010 Bell Micro LPGA Classic at age 33.

On the LPGA of Japan Tour, Kang Soo-yun holds the record for her Resort Trust Ladies win last season at age 41.

Ji is not considering retirement yet, and once she hits her stride in the season, she may have a shot at setting a new age record on the LPGA Tour.

“I want to win more,” Ji said when asked about her goal for this upcoming season. “I want to [continue playing] on the LPGA Tour and win the money title if I can.”