Having spent more than 200 million won ($186,000) the past two years training in Canada, Korea’s only figure skating pair - Kim Kyu-eun and Alex Kang-chan Kam - are still working hard to finally achieve their dream of representing the country at the 2018 PyeongChang Winter Olympics.

Though the pair didn’t actually bag a spot in the Olympics through the international qualifying events, they’ll still get to compete through an additional berth given to the host country.

The two decided to drop everything and solely focus on training for the 2018 PyeongChang Winter Olympics. Kim, who injured her knee in the summer last year, continued training until her rear cruciate ligament was torn. But instead of withdrawing from the competition, she got an injection in her knee that allowed her to continue. Kam has even put his education on hold to concentrate on training.

Though they have been selected to represent Korea in the figure skating pair event at the Winter Games, the two’s hard work may turn out to be for nothing after Gangwon Governor Choi Moon-soon recently proposed the idea of a unified figure skating team. 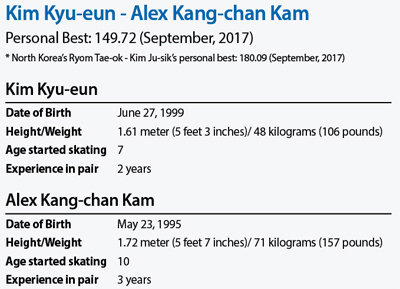 “It was very sad to see how people didn’t even realize that a figure skating pair existed in Korea,” Kim said. “I wish they recognized our hard work over the past two years just for the Olympics.”

For now, Kim and Kam will be given a berth for both the figure skating pair event and the team event, but if a unified team is formed their spot will be taken away.

Kim and Kam first met the North Korean pair - Ryom Dae-ok and Kim Ju-sik - at the 2017 Sapporo Asian Winter Games. Their relationship continued as they trained together in Montreal throughout the summer.

“Just like in football, figure also switches uniforms with others after the competition,” Kam said. “It’s like a ceremonial thing. After a successful performance at the Olympics, I want to switch uniforms with Ju-sik.”

Kim and Kam started competing together as a pair in December 2015. At the time, Kim competed in the ladies’ singles and Kam parted ways with his former partner. The main reason for the two to form a team was their desire to compete at the Olympics.

“I started skating at age seven,” Kim said. “I got compliments for skating well. But when I went to middle school, I grew by about 10 centimeters [3.9 inches] and lost my balance. While I was adjusting to my body, I fell behind other skaters. Since I couldn’t give up on my dream of competing at the Olympics, I turned my eyes to pairs, which was less competitive.”

Not only that, since Kam only weighed 60 kilograms when the two first started, he struggled with lifts.

“I’ve been eating a lot more and have been gaining muscle mass through weight training,” Kam said.

Of the three Korean pairs that existed until 2017, Kim and Kam finished last of the 2017 Four Continents Figure Skating Championships with a total score of 118.91 points. Rather than a disappointment, the two chose to train even harder. In the summer, they left to Montreal to train under Coach Bruno Marcotte.

While they were in Canada, the other two Korean pair skaters quit due to lack of financial support and other issues.

Their effort and all the money spent over the past two years has finally paid off in recent competitions, receiving a total score of 139.54 points at the final qualifying event for the Korean national team at Mokdong Ice Rink in Seoul on Jan. 4. Comparing the score to a year ago, the pair has improved by 20.63.

The also two set a new personal best of 149.72 at the ISU C S Autumn Classic International 2017 in September.