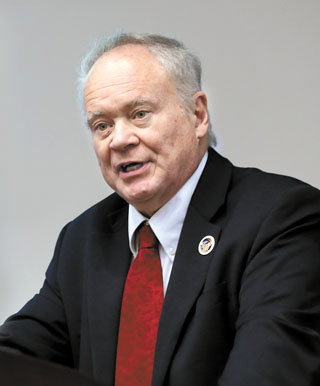 Paul Werbos, known for his pioneering research on artificial intelligence programs, said Seoul may have a role in developing an operating system for the Internet of Things without a back door to prevent hacking by North Korea to shut down systems around the world.

“What I’m talking about is a cyber threat to the power grid, to [self-driving] cars and other critical infrastructure - this threat is growing and I wish the U.S. would do something to help,” Werbos told the Korea JoongAng Daily during a visit to Seoul in December for the Aicon conference on artificial intelligence hosted by the Seoul city government.

“But it is facing political problems and other barriers of its own, so maybe it is an opportunity for [South] Korea,” said Werbos, a fellow at the Institute of Electrical and Electronics Engineers (IEEE).

“Right now, anyone can be attacked by Kim Jong-un, and anybody at risk needs this operating system.”

Werbos, who is considered the original developer of backpropagation, the brain-like learning function of artificial intelligence programs such as AlphaGo, says every operating system of the Internet of Things has a back door that can be breached by a hacker or a terrorist.

“Every physical device in the world is being computer-controlled, from your telephone, the car, the military drone, to the factories, everything,” he said. “The operating systems we have today are full of holes, back doors. If you live in a house with an air conditioner, refrigerator, television and alarms on your door - you’re lucky that it’s not North Korean leader Kim who is controlling them today. But he could in the future if [the operating system] is not secure.”

A back door is a type of code or password that allows anyone who has it to control the system, Werbos said.

“A back door is some special code, almost like a password, with which you get access to the program,” he said. “Operating systems have back doors to keep track of what is being done where, but the problem is that with the same back door, you can use it to shut down the power grid.”

The solution lies in developing operating systems with read-only back doors, Werbos said.

“The mathematics to building an unbreakable system exists, and with this we can build operating systems where all the back doors are read-only, and in this way you can get rid of the danger that a hacker will take control of your power grid,” he said. “And I’ve suggested maybe Korea might do that.”

Werbos is one of the first recipients of the IEEE Neural Network Pioneer Award. He was previously a program director at the National Science Foundation.

A Terminator-like phenomenon may take place in the future if developers are not careful, he added.

“The movie [‘The Terminator’] is very realistic, we need to avoid that path,” he said. “But a core idea in the Internet of Things is that if we want more efficiency, we should have one controlled system that integrates everything in an efficient way and controls everything in the world as one big Internet of Things. And this is happening very, very fast.

“This Internet of Things will be running the world, and if the pieces don’t fit, it could be a gigantic mess. So my message to this community is, we need to develop the global platform in a human-friendly way,” he added. “It’s easy to cheat and develop a computer program that doesn’t need humans. But if we govern the whole world with a computer platform that doesn’t need humans, humans may suffer. And that is what I’m really worried about.

“But I don’t think anyone has the answer. This is what scares me.”

What needs to happen, Werbos said, is for scientists and artificial intelligence programmers to talk to teach other across different sectors and disciplines.

“There is a fundamental problem - as science has become more and more complicated, you have more and more patches all fighting each other ... If I had one billion dollars, what I would do is go back to the Cognitive Optimization and Prediction program by the National Science Foundation, connecting neural science with the mathematics,” he said. “I would put a lot of money back into this research, to fund cross-disciplinary topics to build a better understanding of how the brain works in functional terms.”