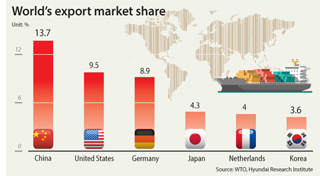 Korea’s rank in the global export market has improved as of last year, but it is unclear whether that momentum will further advance Korea’s outbound shipments.

According to Hyundai Research Institute, Korea is trailing close behind the Netherlands, the fifth-largest exporter in the world as of September.

While the Dutch account for 4 percent of the world’s export market, Korea is close behind with 3.6 percent, two ranks higher compared to 2016.

Korea’s exports last year saw significant improvement largely thanks to demand for semiconductor chips, as the latest technologies from artificial intelligence, big data and the Internet of Things (IoT) have seen unprecedented growth.

In fact, last year’s export reached an all-time high after growing 15.8 percent more than the previous year to $573.9 billion. And for the first time, semiconductor exports reached more than $90 billion after surging 57.4 percent year-on-year.

However, the research institute report projected that this year’s export growth could decelerate.

The International Monetary Fund (IMF) estimates the advanced economy will expand 2 percent this year, which is 0.2 percentage points less than last year. But the emerging market’s economy is expected to enjoy an increase of 0.3 percentage points to 4.9 percent.

One of the biggest risks is the appreciation of the won, which continued to appreciate as it closed 0.61 percent stronger than the previous day at 1,065 won against the U.S. greenback on Friday.

But it is not the won appreciation against the U.S. dollar that is expected to affect Korea’s export.

In fact, the won appreciation against the Japanese yen is likely to shrink Korea’s sales of goods and services overseas.

Hyundai Research Institute estimated that the average Korean exported goods will likely shrink 1.9 percent when the won appreciates to 950 won against 100 yen while it will further decline to 3.4 percent if the won further strengthens against the Japanese currency to 900 won.

The research institute projected eight industries will be the next growth engines - next generation semiconductors; next generation display, energy, biopharmaceutical and health; aerospace; high-tech new materials; electric cars and robots.

These areas sold $73.6 billion, which grew 27.5 percent, sharper than the overall export growth of 15.8 percent.

It suggested that the companies need to further strengthen the competitiveness of these products in order for Korea to become the world’s fifth-largest exporter, while the government is coming up with measures to hedge risks coming from China and the United States, as well as diversify major Korean exported goods.