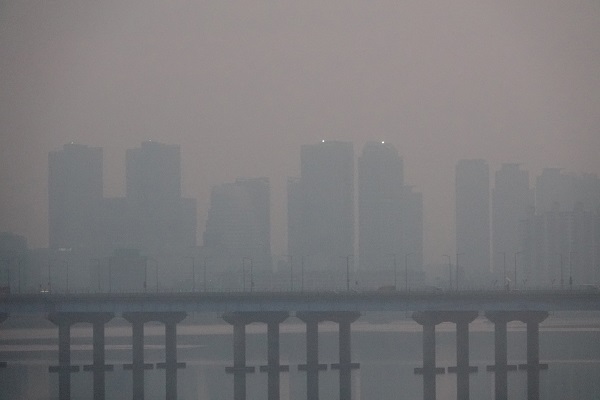 High-rising apartment complexes behind the Seogang Bridge in Seoul look murky on Monday as the fine dust in Seoul reached unhealthy levels. [YONHAP]

After the amount of fine dust in the air shot into unhealthy levels, Seoul’s city government offered free public transportation during Monday’s rush hours to encourage more people to leave their cars at home.

“This is the first time ever that the Seoul Metropolitan Government has launched an emergency fine dust reduction apparatus, through which 33,000 public vehicles will not be used on Monday and the 360 parking lots for public vehicles will be shut down for the day,” said the city government in a statement Sunday. “The emergency fine dust reduction apparatus will be launched from 6 a.m. to 9 p.m. Monday.

The decision to launch the emergency fine dust reduction system was made at 5:15 p.m. Sunday. The average density of PM2.5 fine dust particles per cubic meter of air in Seoul was 28 micrograms around 9 a.m. Monday, according to the Seoul city government. The level rose to 58 micrograms around 4 p.m.

According to Seoul’s own standards, more than 50 micrograms per cubic meter air is considered unhealthy.
PM2.5 particles are less than 2.5 micrometers in diameter – about thirty times smaller than the width of a human hair – and can travel through the respiratory tract and reach the bloodstream. The World Health Organization described fine dust particles as carcinogenic in 2013.

“The city government’s emergency fine dust reduction apparatus is launched whenever the level of PM2.5 fine dust particles in the air is unhealthy and is projected to be unhealthy the next morning,” said the Seoul city government Sunday. “The apparatus was established in July last year.”

All buses in Seoul and subway rides on sections of lines No. 1 through 9 that are in Seoul will be free during rush hours on city-designated emergency days as long as passengers pay with transportation (T-money) cards or credit cards that come with transportation chips. Free rides are not offered to people who pay with cash on buses or buy single-ride tickets at subway stations.

“When I tagged my transportation card on a bus to work, it said, ‘Free because of fine dust,’” said a man in his 30s in central Seoul on Monday morning. “That sure is a good start to the week.”

“I wonder if the city government is trying to pull off another populist policy before the local election season,” said a 33-year-old office worker surnamed Kim. “I don’t know if free public transportation is enough to convince drivers to switch to buses and the metro.”

It is also unclear if the free public transportation policy can continue to be financed by the city government. It cost the city some 3.5 billion won ($3.3 million) on Monday.

“The Seoul city government may be a bit hasty with the policy,” said the Gyeonggi provincial government in a statement on Monday. “We project that the city will need some 100 billion won a year for this policy if it offers free public transportation during rush hours some 15 times a year.