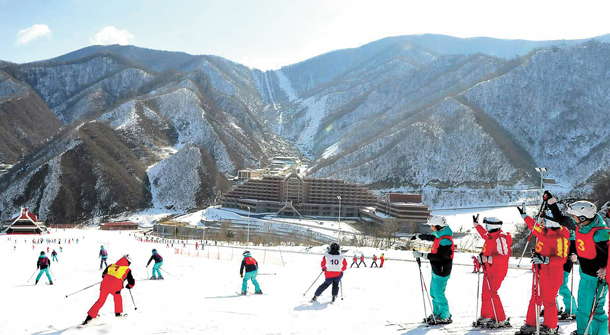 North and South Korean skiers will train together for the PyeongChang Winter Olympics at the Masikryong Ski Resort in North Korea’s Kangwon Province.

On Sunday, North Korea accepted the South’s proposal to send an advance team of inspectors to the North, from Tuesday to Thursday this week, to check the facilities at the Mount Kumgang Resort and Masikryong Ski Resort.

After the two Koreas agreed to hold a joint training session at Masikryong Ski Resort, which opened in December 2013, in the latest inter-Korean meeting on Wednesday, the Korea Ski Association released a positive statement regarding the decision. “It’s a project we’ve been preparing for the PyeongChang Olympics since three years ago,” they said. “We expect to see a lot of positives. It’s different from women’s ice hockey, where the government made the decision without consulting with the association beforehand.”

Despite the positive view of the association, the coaches are cynical about the decision, as a joint training session right before the Olympics won’t help the skiers much. Since the skiers could train at the Olympic venue if they were in South Korea, they believe that training together this late in the game won’t benefit the athletes.

A former member of the Korean national team who is now a coach admitted that he had recently heard from the Chinese Ski Association that the course is in good condition, based on a recent trip to North Korea. However, he still doubts whether training at the Masikryong Ski Resort will be any help for the skiers, as they could be spending more time training at Jeongseon Alpine Centre or Yongpyong Resort.

The details of the exact number of players or which specific athletes will be heading to the North haven’t been announced yet, but there’s a high possibility that the second division skiers on the national team or members of the youth national team will participate in the joint training. The vice unification minister explained that they plan on sending competent skiers who are a part of the Korea Ski Association, but are not competing at the Olympics, to the joint training session.

“Second division skiers can’t compete at the Olympics, but they still participate at the Olympics as trial racers, testing the quality of the snow on the slope,” said a coach. “Due to this, they need to train at the venue and prepare for the Olympics. This schedule can’t affect the skiers.”

Another ski coach, who coaches a university team, mentioned the issue of safety. There are ten slopes at Masikryong Ski Resort, each with a width varying from 40 to 120 meters (44 to 131 yards) wide.

“For courses hosting international competitions, slopes must be patched as slippery as ice, so the skiers can slide down the slope quickly and easily,” said the coach. “But at Masikryong Ski Resort, no international event has been hosted. It’s questionable as to whether they have the quality of ice to host international events.”

Once again, another coach also doubted that a joint training would help the skiers much in preparing for the Olympics.

“Normally, ski resorts close in March, but I heard that Masikryong Ski Resort is open until May,” said a coach. “It would have been nice if they trained together in April or May, without having to leave to a foreign country for offseason training. I’m questioning if it’s really needed for them to go there at this time.”

Coaches have shown concern not only towards the issue regarding the timing, but also whether the joint training will be managed properly, as it is being held just ten days after the agreement.

“No one would like to go to North Korea if we tell them at the last minute,” said a coach on the Korean men’s team. “Players’ safety is a severe concern, considering the murder of a South Korean tourist at Mount Kumgang in 2008.”

A former board member of the Korea Ski Association is also not convinced by the idea. “It’s a good idea, but having a joint training session at a course not officially confirmed won’t help the athletes,” he said. “It would have been good if they went to a joint training camp or competed in events together by sharing techniques.”