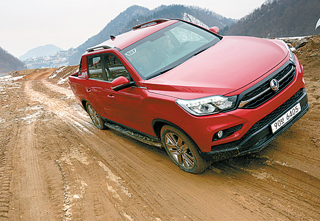 A Rexton Sports being driven on an off-road course in Gangwon. [SSANGYONG MOTOR]

CHUNCHEON, Gangwon - The small island of Sonamiseon in Gangwon Province was transformed into an off-road course last week when SsangYong Motor held a test drive of its new 2018 Rexton Sports, the only SUV-styled pick-up truck available in Korea.

The temperature was just above zero and the course was full of slushy snow and muddy pebbles, giving the vehicle challenging conditions.

SsangYong Motor, known for its SUV expertise, touted the Rexton’s quad frame platform and four-wheel drive based on its 4Tronic system, elevating it above its previous pick-up truck model, the Korando Sports, which suspended sales in Korea and is only manufactured for export.

A first timer behind the wheel of a pick-up truck, the Korea JoongAng Daily reporter wanted to see if the Rexton was equally good on an off-road course and for urban driving. 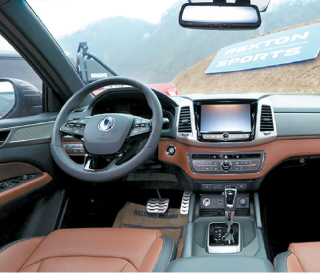 The interior of the Rexton Sports. [SSANGYONG MOTOR]

Despite being equipped with a diesel engine, the Rexton’s driving experience was softer and quieter than expected on the highway. A SsangYong Motor official explained that is thanks to a stiffer suspension that absorbs shocks coming from the road.

On highway driving, the sounds from the engine and wind were minimized to the level that the driver and the passenger didn’t notice the car was driving beyond 100 kilometers an hour (62 miles an hour).

The weighty frame kept the car unshaken and made the driver feel safe and secure even when speeding beyond 150 kilometers an hour. Its smart car technology - including Lane Change Assist and Rear Cross Traffic Alert - made urban driving as convenient as in a smaller vehicle.

The Rexton Sports also boasts a 9.2-inch screen equipped with Apple CarPlay and a mirroring capability for Android smartphones. The screen’s generous size made using maps and mirroring from the phone much easier than in vehicles with smaller screens.

The layout of the dashboard was designed to help driver and front seat passenger find various functions very easily. It is pretty common these days for drivers to be baffled by complicated controls for simple functions like the car’s heater. But the Rexton Sports is easy to navigate. The off-road course was where the Rexton Sports flaunted its real charm.

The hill-start assist function prevented the car from rolling backward on a steep hill even when the driver’s foot was taken off the brake pedal. The hill-descent control function prevented the car from speeding up too much when driving down the hill. Even if the foot was taken off from both accelerator and brake, the car maintained a certain speed when rolling down a hill.

Since the company started accepting pre-orders on Jan. 2, a total of 5,500 units were reserved as of Wednesday.

“The Rexton Sports is targeted at male drivers between the ages of 30 and 49,” said a SsangYong Motor official. “On the back of the rising popularity of SUVs in Korea and abroad, adding a pick-up truck option will give a nice alternative to customers looking for a car suitable for recreational outdoor activities.”