An electronic ‘Arirang’ for the millennial generation

An electronic ‘Arirang’ for the millennial generation 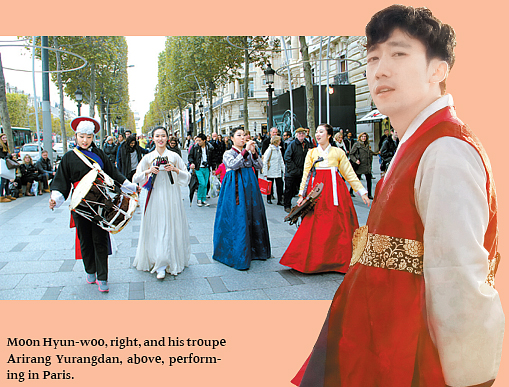 At the old Seoul Station building, the country’s most famous folk song is getting an EDM makeover.

“We want to show all the visitors of the Hanbok Market that enjoying our cultural heritage, such as our music and our clothes, doesn’t always have to be so tied down to tradition,” said Moon Hyun-woo, who is putting the concert together.

Moon, 30, styles himself as a “propagator of Korean cultural heritage.” He is head of Arirang Yurangdan, a traditional performance troupe that travels across the globe spreading Korean culture, and the Arirang School, which trains people in traditional Korean instruments and dance. Given Moon’s experience as a cultural ambassador, the Hanbok Advancement Center, which organizes the market every year, reached out to him for help.

“When Arirang Yurangdan was traveling across the globe performing ‘Arirang’ and other traditional songs and introducing Korean culture, we learned that foreigners were so open to it,” Moon said, “and Koreans realized then how much they had neglected their passion for their own traditions.” This drove him to create events around “Arirang” in Korea, too.

Moon’s obsession with the song began in his childhood, when he was raised abroad. The folk song about longing between two lovers helped him get through difficult times, he said.

Moon is now enrolled in the Social Entrepreneurship MBA program at the Kaist School of Business, with hopes of turning his project into a stable social enterprise.

“I hope to create this virtuous cycle,” he said, “where Koreans really enjoy our own traditional culture, then voluntarily become ambassadors of Korean culture whenever they go out into the world, and then ultimately protect and spread our cultural heritage.”