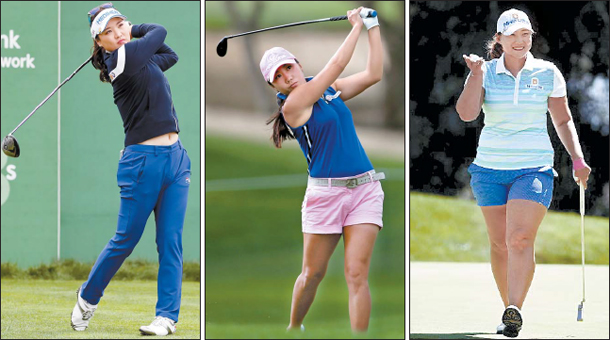 The LPGA Tour is back in full swing with the Pure Silk Bahamas Classic starting tomorrow at Paradise Island. Unlike previous years, the season opener is likely to be a lot more competitive, with five of the world’s top 10 golfers participating this weekend.

The impressive field stems from an LPGA Tour regulation requiring a player not to miss a tournament for four consecutive years. Many of the golfers have not played in the Bahamas since 2014 and some since 2013 before it was added to the regular season schedule.

As a result, the pool of Korean golfers has grown since last year, from four to seven. Among them, Ryu So-yeon enters the tournament as the highest-ranked Korean in the world, at No. 3.

“I’ve been training in Dallas, but it was cold there,” the 27-year-old golfer said after a practice round in the Bahamas on Tuesday. “It was fun playing a round wearing shorts and short-sleeve shirt.”

This is the first time since 2013 that Ryu is starting her season this early because of the LPGA regulation change. The last time she played at the Bahamas Classic, she finished tied for 13th at 12 under par.

The 2018 season stands to be a significant one for Ryu as she comes off 2017 with high expectations.

“Since I did so well in the 2017 season, it was hard to set a goal in the 2018 season,” Ryu said. “But one thing I was the most disappointed about was not being able to win while I was ranked first in the world. Just like I did last year, I’ll concentrate during practices and try my best in each round and each tournament.”

“I’m used to the windy conditions,” she said, “but there are a lot of hazards on the course, so I’ll have to be careful.”

Ryu will tee off on the first hole at 8:05 a.m. along with Michelle Wie and defending Champion Brittany Lincicome.

Along with Ryu, Kim In-kyung will be playing in the Bahamas Classic for the first time since 2013, when she finished tied for 27th at 11 under par.

Her victory in the United Kingdom was her first major title after playing in 46 major tournaments - and after a nightmare tournament at the 2012 Kraft Nabisco Championship where she missed her chance of winning her first major by missing a tap-in putt on the last hole.

Kim tied Feng Shanshan of China in most number of wins in 2017. Feng is currently No. 1 in the world.

Kim will tee off on the 10th hole at 12:20 p.m. along with Brooke Henderson and Danielle Kang.

Lee Mi-rim, who won the 2017 Kia Classic, also hopes to get off to a great start this season at the Bahamas. Last year, after winning a tournament for the first time in two years in the beginning of the season, the 27-year-old had a poor finish, missing the cut at the Evian Championship and finishing in the 50s and 60s in the next four tournaments.

This year, Lee has set two goals: win a major and win more than one tournament. In the offseason, she focused on her shots, believing that her poor finish in 2017 came from her shot misses rather than her putting.

“The first tournament is kind of like a test to see how complete my shot is,” Lee said referring to the Bahamas Classic.

She last played in the tournament in 2016, where she finished tied for 55th at one under par.

Throughout the history of the Bahamas Classic, which started as the season opener in 2013, Korean golfers have been dominant, winning three of the five years.

The course is known for its island winds, and because of that, many golfers tend to skip the event to avoid worsening their swing, which many have worked on throughout their offseason.

Scheduling is another issue. Since the LPGA Tour doesn’t have a tournament scheduled for two weeks, some players like Park Sung-hyun and Park In-bee have opted to start their season in Asia in February.

Although the Bahamas Classic will be tough for golfers in many respects, it will be exciting for fans, as the complete field includes 12 of the top 20 golfers from last season’s CME Globe ranking.

Last year, Lincicome won the tournament at 26 under par, and the Korean golfers struggled, with Kim Hyo-joo’s finishing the best at ninth.