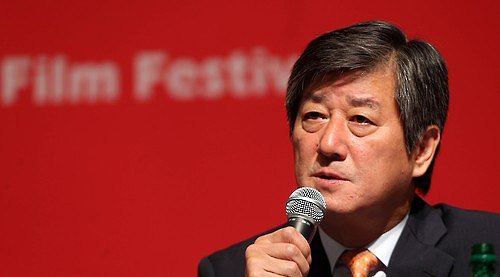 Hope is growing that the Busan International Film Festival (BIFF) will once again be a success after its former executive director, who resigned amid a dispute with the festival’s sponsoring city of Busan, returned on Wednesday.

BIFF convened an extraordinary plenary session and named Lee Yong-kwan, a former executive director, as chairman of the festival’s board of directors.

Lee took office as the executive director in 2010 but resigned from the post in February 2016 after years of conflict with the Busan metropolitan government over the latter’s “municipal interference” in the festival’s artistic freedom.

The conservative Busan Mayor Suh Byoung-soo, who was then BIFF organizing committee chairman, allegedly tried to block the screening of a documentary film critical of the Park Geun-hye administration’s handling of the country’s worst-ever ferry disaster, which occurred in 2014.

The screening led to an unprecedented audit into then-festival director Lee, and he was later convicted of embezzlement.

Three film industry associations, led by the Directors Guild of Korea and representing about 300 movie directors, have boycotted the annual festival for two consecutive years. They demanded an apology from Suh and Lee’s reinstatement.

“As the former director has returned to the festival, there could be some changes like ending the boycott,” Lee Sang-gil, vice chairman of the Federation of Korean Movie Workers’ Union, told Yonhap News Agency by phone. “Since the apology of the Busan mayor also was part of the condition for our return, we will make public our official position sooner or later.”

“BIFF seems to have made the easiest decision,” a film industry official said on condition of anonymity. “I hope Lee and Jeon will stay in tune with each other to settle the dispute.” Yonhap