The 2018 PyeongChang Winter Olympics has chosen as its mascot the legendary white tiger. Named Soohorang, the character is taken from the myth of Baekho, also known as the White Tiger of the West. According to Korean lore, Baekho protects the people and looks after their well-being. Continuing this tradition, Soohorang now serves to protect the athletes, spectators and everyone else participating in the Games. Soohorang’s name is a portmanteau of sooho, which means ‘protection,’ and rang, which is middle syllable of the word for tiger, horangi, as well as the final syllable of the classic Korean folk song, “Arirang,” which is recognized by Unesco and is believed to have originated in Jeongseon County, one of the three regions in Gangwon that will host the Olympic Games, alongside Pyeongchang County and Gangneung. It is also said that Soohorang’s white color was chosen to represent the snowy landscape and the purity of the Korean heart, as expressed in numerous proverbs. 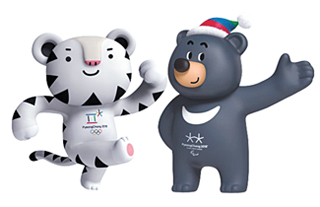 While Soohorang is inspired by a mystical creature, the mascot idea for the Paralympics comes from a real-life Korean inhabitant, the Asiatic black bear, also known as the moon bear because of the moon-shaped mark on its chest, which lives in the mountains of Gangwon. Named Bandabi, this character represents the undying will to achieve one’s dreams and courage of a great athlete. Its name comes from the words banda, from bandal or half-moon, and bi, meaning commemoration - as in to celebrate the Games.