Two paintings featuring a dragon and a tiger that date back to the Joseon dynasty (1392-1910) are revealed for the first time together. They were large wall hangings that formed a pair. [NATIONAL MUSEUM OF KOREA]

In East Asia, tigers were once regarded as a sacred animal that helped ward off evil spirits. For Koreans, the courageous tiger was a symbol of Korean identity, while in Japan, although the animal is not indigenous to the country, people revered tigers as mythical creatures. For the Chinese, the animal was a subject for worship, symbolizing courage, protection and good fortune.

Countless works of art and artifacts depicted this sacred animal for thousands of years in the three countries, and they can be witnessed at the “Tigers in East Asian Art” exhibition that recently began at the Special Exhibition Gallery of the National Museum of Korea in central Seoul.

The last time tiger art was displayed at the National Museum of Korea was in 1988 in an exhibit titled “The Tiger in Korean Art,” when Korea hosted the Olympic Games and its mascot was Hodori, also a tiger. According to the museum, about 145 works of art and artifacts featuring tigers are on display, where visitors can get a glimpse of how people from each country revered this animal.

How different are the tigers of the three countries?

Park Kyung-eun, the curator of the exhibition, says all three countries saw tigers as divine, but in Korea, tigers are depicted in two different ways ? as a fearsome and sacred, or as a friendly companion.

“Having two-thirds of the country composed of mountains,” Park said, “Korea was once home to a large tiger population, often being called the ‘Land of Tigers,’ and therefore to Koreans, tigers were both sacred and seen as a friendly animal.” 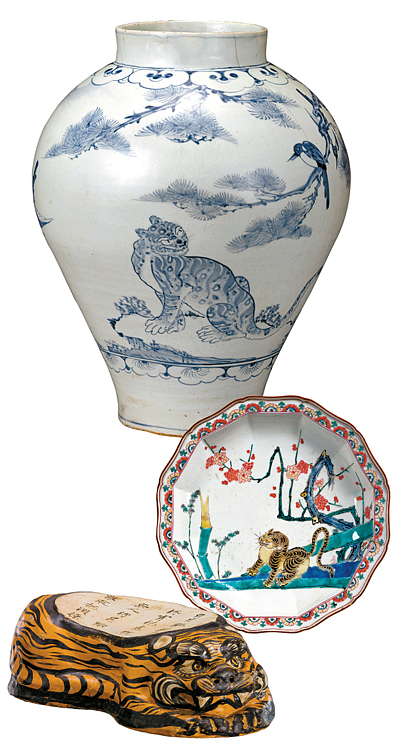 From top: Korean porcelain featuring a tiger and a magpie; Japanese Edo-era (1603-1868) dish featuring a plum blossom, bamboo trees and a tiger; and a Chinese tiger-shaped pillow from the Jin dynasty (1115-1234). [NATIONAL MUSEUM OF KOREA]

Meanwhile, in China, Park said, tigers were always the subject of worship and depicted as a patron saint. In Japan, on the other hand, since tigers are not indigenous to Japan, Park said that many tiger paintings are “quite cute,” although it seems like the “artists attempted to paint a courageous-looking tiger.”

Tokyo National Museum’s Executive Director Zeniya Masami also explained that tiger paintings from Japan are “on the cute side compared to Korean tigers and Chinese tigers, since Japanese artists had to imagine what tigers looked like, or refer to tiger paintings from Korea and Japan.”

He added, “Perhaps because we are more familiar with cats, tiger paintings from Japan are very cat-like and cute.”

In the “Korean Tiger: Icon of Myth and Culture” section, the famous “Tiger Under a Bamboo Tree” painting by Joseon dynasty (1392-1910) master Kim Hong-do is on display. A large wall hanging of a tiger and a dragon, which form a pair, is also now revealed to the public for the first time as one set. According to Park, there was a custom of hanging New Year’s paintings, called sehwa, on the doors or in the main halls of the royal palace and government buildings during the Joseon dynasty to ward off evil spirits and bring good fortune.

The exhibition ends on March 18.