‘Richard III’ fights its way to the throne : Actor Hwang Jung-min returns to stage for the first time in 10 years

‘Richard III’ fights its way to the throne : Actor Hwang Jung-min returns to stage for the first time in 10 years

The cast of Shakespeare’s “Richard III” pose for the press at a preview held on Feb. 1 at the Seoul Arts Center in southern Seoul. The play runs through March 4. [SEM COMPANY]

Seoulites in the winter of their discontent can escape the freezing temperatures by checking out a modern adaptation of “Richard III,” one of Shakespere’s most famous plays.

The show is now being staged at the Seoul Arts Center in Seocho district, southern Seoul, and features actors Hwang Jung-min, Jung Woong-in and Kim Yeo-jin. The production runs through March 4.

Hwang Jung-min plays Richard, who eventually rises to become the king by killing everyone who stands between him and the throne. [SEM COMPANY]

The story revolves around Richard, the younger brother of King Edward IV, who rises to the throne by eliminating everything that stands between him and the crown. Having been ostracized throughout his life for his deformed body and distorted mind, he is focused on his one and only goal - to seize the crown.

Even after he rises to a position where no living thing can bother him, he attempts to consolidate his power by getting married to Lady Anne (Park Ji-yeon), the young widow of Prince Edward, who was the son of the former king Henry VI.

Through the allure of the bloody and manipulative king, Richard III, the play demonstrates how people can be attracted to evil, despite knowing that they will end up being destroyed. Although the king cruelly kills his family as well as others who he considers to be obstacles, characters like Lady Anne are seduced by him, despite the fact that she knows that he killed her husband and father-in-law.

“The greediest and most misleading people dream of being on the throne and nothing can stop them. They don’t give up on accomplishing their goals,” said Seo Jae-hyung, director of the play, during a press preview held on Feb. 1.

“At this point, we should look over ourselves, and ask, ‘Why do we live in a world where we can’t look around at anything but goals, what made us like this?’”

Saying that he wanted the audience to comprehend the message the play conveys, he did his best to make the stories as relatable as he could. 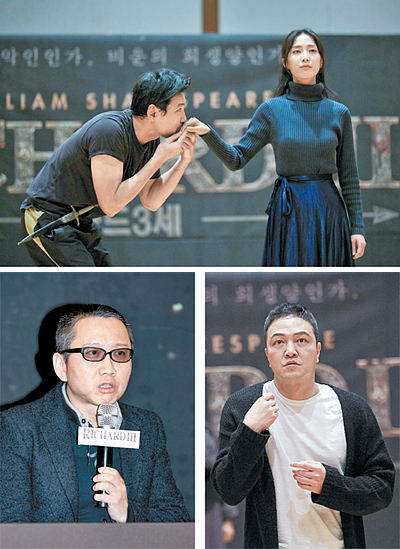 By adding trendy expressions used by young people, such as “I feel like I ate hundreds of sweet potatoes,” when Richard is speaking how dissatisfied he is, modern audiences may find it easier to relate to the dialogue than other productions of the play.

All of the actors in the production play double roles except for Hwang. “Because all of the actors are versatile, I didn’t want them to just go home after they finished a few scenes. And by assigning both the kind and evil characters [to the actors,] I wanted them to fully demonstrate the two sides interpreted in their own ways,” said the director.

Audiences won’t have to worry about getting Richard confused with anyone else on stage as Hwang fully embodies the character throughout the entire play.

“I struggled a lot while practicing for the play because, unlike shooting a movie which films scene by scene, there isn’t enough time to catch my breath backstage. I learned that I run out of breath very easily, and because of this piece, I had to study breathing.”

His approach to the role impressed many of his co-stars. Kim Yeo-jin who plays Queen Elizabeth said, “Hwang always comes in first and is the last to leave. The amount of lines he has is really huge, but he does it.”

Jung Woong-in who plays King Edward IV and Richmond, echoed Kim. “I believe Hwang always practiced wherever he was, whether he is in the bathroom or driving a car.”