PyeongChang tents are cheap and temporary

PyeongChang tents are cheap and temporary 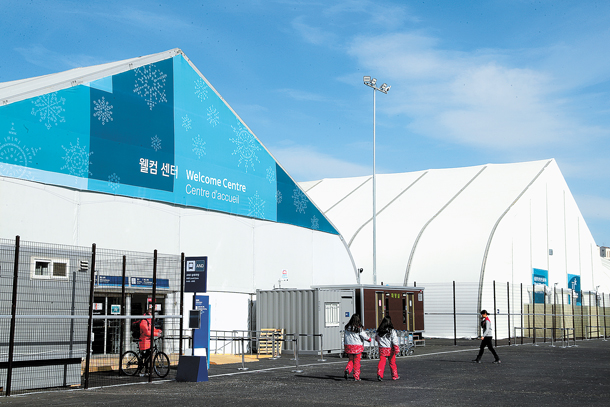 Many facilities for the PyeongChang Olympics are in tents, including the Welcome Centre at the Athletes’ Village in Gangneung, Gangwon, pictured above. The tents are waterproof, fireproof and built to weather the Gangwon winter. [YONHAP]

Olympic facilities - and what to do with them - can cause a massive headache for host countries once the athletes and spectators have headed home. This year, the organizers of the PyeongChang Winter Olympics have opted to make use of a number of reusable tents, a plan that might also save them some 100 billion won ($91.7 million).

The PyeongChang Organizing Committee for the 2018 Olympic and Paralympic Winter Games (Pocog) installed a total of 696 tents - 280 large industrial tents and 416 small canopy tents - across Olympic venues in Gangwon as operational facilities. The smaller canopy tents are used as temporary storage rooms, passenger waiting areas for buses and security scanning areas, while the staff lounges and cafeterias are housed in the larger tents. One section of the Main Press Centre (MPC) is housed in a large tent that is 47 meters (154 feet) wide, 100 meters long and 15 meters tall.

Seoul Tent, a domestic tent rental and retail business, is the Games’ official temporary event structure supplier. “If we constructed temporary buildings using sandwich panels, it would have cost five to six more times than installing the tents,” said Park Jong-yeol, manager of ice sports facilities for Pocog. The total bill for the tents came to 24.1 billion won, approximately 100 billion won less than the expected cost of setting up temporary buildings.

Tents are also an eco-friendly option as Seoul Tent will be able to rent them out again for other events after the Games end. “Some of the tents that will be used in the Games were used in the 2014 Incheon Asian Games, as well as the 2015 sixth CISM World Games Military Games, Korea,” said Kang Min-ho, a manager from Seoul Tent. “We plan to use the tents again for various cultural events and exhibitions after the Olympics.”

“The International Olympic Committee also recommends the use of temporary buildings and tents,” added Park Hyung-cheol, a team leader for the organizing committee’s ice sports facilities.

These tents are built to weather the Gangwon winter. Made of polyvinylidene fluoride, a waterproof and fireproof resin material, there has been no issue with heating or leaking so far. “Though there was a flooding issue at the MPC during construction, the problems have been resolved,” admitted Park Jong-yeol.

While Gangneung, where many of the Olympic events will take place, recorded outdoor temperatures of 0 degrees Celsius (32 degrees Fahrenheit) on Wednesday, it was 17 degrees inside the press facility, warm enough for journalists to take their jackets off. The tents have also been constructed with two layers of resin material to prevent condensation from forming on the ceiling.

Alongside the tents, shipping containers are also being used for the facilities in Pyeongchang. For this Olympics, Pocog installed 2,515 cabins and 422 containers for administrative use, as well as 568 containers to be used as bathrooms. The International Olympic Committee has already inspected the facilities.

PyeongChang learned its lesson from previous Olympics. Its decision to use containers was inspired by Norway’s Lillehammer, which concluded the 1994 Winter Olympics with a surplus, rather than a debt, after minimizing organizational costs by constructing all major facilities like the athletes’ villages out of shipping containers.

“There were bathrooms in the MPC two years ago at the 2016 Rio Summer Olympics, but now we don’t have any,” said Park Jong-yeol. “It is because we took note of observations that there were problems with poor ventilation.”