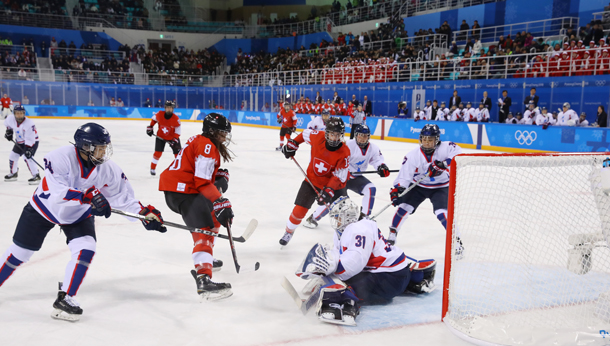 Switzerland, in red, attempts a goal during a match against the inter-Korean women's ice hockey team at the Kwandong Hockey Centre in Gangneung, Gangwon, on Saturday. [YONHAP]

The inter-Korean women’s ice hockey team made its Olympic debut with a shutout 8-0 loss to Switzerland at the Kwandong Hockey Centre in Gangwon on Saturday.

The team was never expected to do well, considering their ranking - the South in 22nd and North in 25th compared to Switzerland’s sixth. The team’s place in history was simply being there. The squad comprising North and South Korean players - the first such team at any Olympic Games - allowed three goals each in the first two periods and another two in the third period.

Three North Korean players were included in the final roster, with one in the second, third and fourth lines.

Prior to the joint team’s game, Sweden defeated Japan 2-1. The inter-Korean team will play against fifth-ranked Sweden on Monday and ninth-ranked Japan on Wednesday.

In a sign of how important the match was politically, South Korean President Moon Jae-in and the first lady, Kim Jung-sook, watched the game with members of the North Korean delegation, including Kim Yo-jong, North Korean leader Kim Jong-un’s sister, and Kim Yong-nam, the country’s ceremonial head of state.