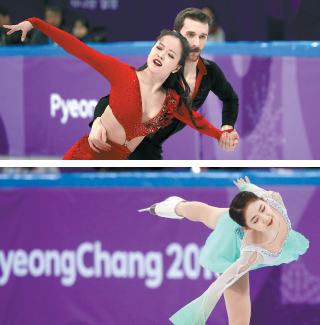 At the end of the first part of the competition - in which skaters from each of the four disciplines perform their short programs - Korea ranks ninth out of 10 nations.

The team event, which was added to the Olympics in 2014, has teams compete in each of the individual figure skating events - men’s single, women’s single, pairs and ice dance - to create a combined score. The country with the highest combined score after all four events takes home the gold.

The events are separate from the individual program, so a skater may end up performing the same routine twice during the Olympics.

The five teams with the highest points from the four disciplines’ short programs will compete in the free program on Sunday and Monday.

Still, some Korean skaters managed to perfrom their personal best on Sunday.

Before PyeongChang, Choi’s personal best was 62.30 points, which she scored at the 2018 Four Continents Championships.

Successfully landing her triple lutz and triple toeloop at the beginning of the program, Choi managed to finish sixth, adding five points to Korea’s cumulative score.

“I’m satisfied that I performed with no regrets,” said the 18-year-old skater after her performance.

The program didn’t go as smoothly for the pair after Min suffered a wardrobe malfunction in the early part of their routine.

“My costume came undone maybe in the first five seconds of the program,” said Min. “And I know that if this comes undone, then the whole thing comes undone. I had that panic in the back of my mind.”

Throughout their program, Min struggled to keep her costume on, which Korean commentators suggested might have detracted from gaining more points.

It was no surprise that Canada’s three-time world champions and former Olympic champions Tessa Virtue and Scott Moir took the lead with 80.51, while the United States came in second with 75.46 points and the Olympic Athletes from Russia (OAR) came in third with 74.76 points.

Canada is leading the team event with 45 points, followed by the OAR with 39 points and the United States with 36 points.