North and South Koreans develop friendships on the ice

North and South Koreans develop friendships on the ice 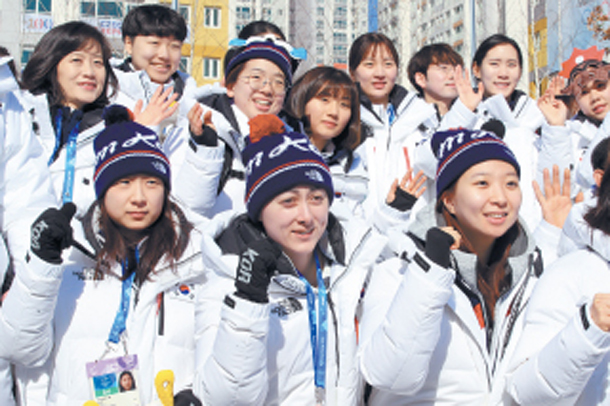 Members of the inter-Korean women’s ice hockey team attend a welcome ceremony for Korean athletes at the Gangneung Olympic Village on Feb. 7. [YONHAP]

The Olympic rapprochement between North and South Korea came so suddenly last month that women’s hockey players on both sides barely had time to get to know each other when they had to hit the ice last week for their first match against Switzerland.

But after several practices, the players warmed up to each other. By the time they had to face Sweden in their second preliminary match of the Olympics on Monday, the South Korean players were teaching their North Korean teammates K-pop dance routines in the locker room, according to coach Sarah Murray.

The move deeply divided a country already split on whether to engage with or clamp down on the repressive regime. Some thought it was unfair that South Korean players would have to sit out their first - and possibly last - Olympic Games, while others hailed the inter-Korean team as a milestone in promoting peace between the two nations.

Though they are united on the ice, the players have to take separate buses and sleep in separate buildings at the athlete’s village. A source close to the hockey team said the South Korean players miss their North Korean teammates each time they have to part.

Outside of hockey, there have been serendipitous encounters between North and South Korean athletes during practice sessions.

At one short-track training event on Feb. 8, South Korean speed skater Kim Ye-jin and North Korean skater Jong Kwang-bom shared a moment of laughter on the rink. “He joked around and told me I was ugly,” Kim said of Jong, “so I joked back asking if he had looked in a mirror.” Kim said the comment lightened up the atmosphere.

The two reunited on the rink for another joint training session on Tuesday. At the Olympic Village in Gangneung, where ice events are being held, Kim can often be seen approaching North Korean athletes with ease.

“They are people just like us,” Kim said when one reporter asked her if she felt confused about training with North Korean athletes. “There’s no reason for me to be surprised.”

The figure skating pairs from both countries have also built up a relationship over the years through their international competitions. In particular, Kim Kyu-eun of South Korea and Ryom Tae-ok of North Korea have developed a friendship.

“We got close by sharing gimbap [rice rolls] and kimchi,” Kim said. “I think I got closer to Tae-ok because we are the same age.”

At the PyeongChang Winter Olympics, they were reunited. Kim bought Ryom an eye shadow brush and hot pack for her birthday and presented the gifts to her after their individual training on Feb. 5.

Friendly encounters between North and South Korean players are not a new phenomenon. At the Rio Olympics, South Korean gymnast Lee Eun-ju approached North Korean gymnast Hong Un-jong and took a selfie with her. After the photo went viral on social media, Thomas Bach, president of the International Olympic Committee called it a “great gesture.”

For all the talk of “one race” and “one people,” it might not be Koreanness that brings the hockey team together but the sport’s innate demand for collaboration. Kim Jung-hyo of the Korean Philosophy Society for Sport and Dance says athletes playing in a team need to find common ground and set strategies together before matches.

“In order to develop strong bonds together, teammates start training together and naturally feel a sense of kinship with one another,” he said, adding that body language is another important factor in developing a close relationship between North and South Korean athletes.

“Teammates need to learn each other’s body language in order to know that once someone makes a pass to another member, that same member will receive the pass and give it back to the other member.”

Kim believes that under these circumstances, North and South Korean athletes have grown closer to one another.

On the sidelines of the Games, Lee Kee-heung, president of South Korea’s Olympic committee, plans to work with his North Korean counterparts to organize a joint event for athletes on Friday, the start of the Lunar New Year, a significant holiday in Korea.