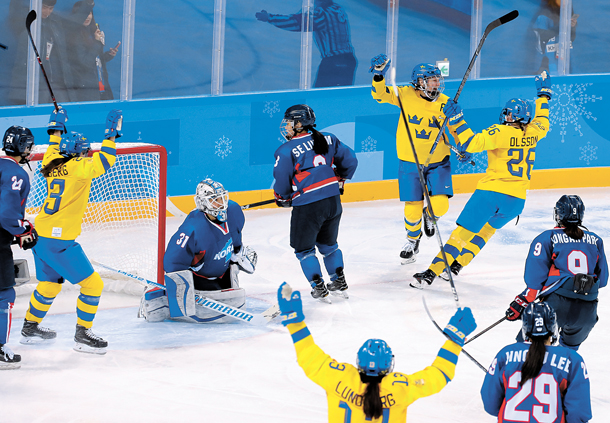 The inter-Korean women’s ice hockey team, in blue, during its preliminary round game against fifth-ranked Sweden at Kwandong Hockey Centre in Gangneung, Gagwon on Monday. [YONHAP]

The inter-Korean women’s hockey team was eliminated in the preliminary round at the PyeongChang Winter Olympics on Monday, following its 0-8 loss to Sweden.

Korea suffered its second straight loss in Group B at Kwandong Hockey Centre in Gangneung, the site of all ice events during the Olympics, two days after falling to Switzerland 0-8. The shots were 50-19 for Sweden.

Korea needed to finish in the top two in Group B to reach the knockout stage. But with the two losses, it won’t get there regardless of the result against Japan in the Group B finale on Wednesday, which will also take place at Kwandong.

Sweden, which earlier beat Japan 2-1, and Switzerland have two wins apiece. They’ll clash on Wednesday at Kwandong with the top seed at stake.

In the women’s tournament, there are eight teams divided into two groups of four, based on 2016 world rankings.

Canada, the United States, Finland and Russia are in Group A, and the top two countries from this group will advance directly to the semifinals, while the bottom two will reach the quarterfinals. The top two teams from Group B will join them in the knockout stage.

The bottom two teams of Group B, Korea and Japan, will be relegated to the classification playoffs, where they will face the losers of the quarterfinals.

Korea head coach Sarah Murray made some lineup changes for Monday’s game. Of the 23 South Koreans and 12 North Koreans on the expanded team, only 22 players - 20 skaters and two goaltenders - can play each game, and at least three must be from North Korea.

South Korea is ranked 22nd in the world and North Korea is 25th. Their combined effort wasn’t nearly enough against fifth-ranked Sweden.

The 4,244 fans at the 6,000-seat arena included dozens of North Korean cheerleaders. But even their singing and dancing could do little to spur the flustered team.

Sweden peppered Korean goalie Shin So-jung with five shots in the opening 1:32, and then converted its first power play chance at 4:00 in the frame, as Maja Nylen-Persson’s wrist shot from the point, got through traffic and found the back of the net.

Sweden nearly doubled the lead in the next minute, when Sabina Kuller’s backhander hit the crossbar. Sweden got their second goal at 9:47 on a shot that the usually reliable Shin should have stopped.

Elin Lundberg let go of a harmless-looking slap shot with no screen in front of Shin, but the Korean goalie let the puck squeeze past her and trickle into the net for a 2-0 Sweden lead.

Only 30 seconds later, Sweden went up 3-0, this time on Johanna Fallman’s one-timer from the slot, which beat Shin high on the stick side.

Sweden wasn’t done. At 17:04, Erica Uden-Johansson scored off her own rebound after a two-on-one breakaway, with Lisa Johansson getting the lone assist with a pretty setup.

This was the third straight game that Korea has allowed three or more goals in the first period.

Korea was undone by frequent turnovers in its own zone. The players had trouble clearing the puck out of harm’s way all night, and they even fanned on the puck from time to time and allowed Swedish players to pounce on it. The forwards failed to generate much of an offensive rhythm because they spent the majority of their time in the defensive zone, and by the time they secured the puck, they were already deep into their shifts and had to change.

Korea held Sweden to one goal in the second period, and it came 4:08 into the frame. Pernilla Winberg received Emmy Alasalmi’s cross-ice pass right on the tape, and walked in on Shin untouched before beating the goalie on the stick side for a 5-0 advantage.

Korea enjoyed a decent stretch late in the second period on a power play, with a couple of redirection attempts by forward Choi Ji-yeon finally testing Swedish goaltender Sara Grahn.

But what little momentum Korea built was lost just 1:09 into the third period, when Emma Nordin batted down a point shot by Lundberg and made it 6-0 Sweden.

Sweden piled on 36 seconds later. Winberg picked up her second of the night as her soft shot went off the stick of Korean forward Randi Heesoo Griffin and past helpless Shin in net.

Rebecca Stenberg scored Sweden’s eighth goal by converting a pretty feed from Winberg at 5:34 in the third.