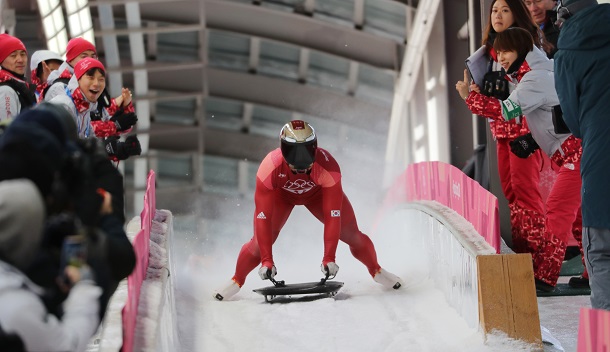 Yun Sung-bin earned Korea’s first ever medal in skeleton at the Olympic Sliding Centre in Pyeongchang, Gangwon on Friday, winning gold and cementing his position as the world No. 1.

Racing first in the third run, Yun recorded a time of 50.18 seconds, good enough to extend his lead by more than one second ahead of Martins Dukurs of Latvia. In the fourth and final run, Yun was the last on the track, setting a new track record - his third in two days - of 50.02 seconds to secure his first Olympic gold.

Yun finished with a combined time of 3 minutes 20.55 seconds, 1.63 seconds ahead of Nikita Tregubov of the Olympic Athletes from Russia. Since the medal standing was determined by the combined time of all four runs, Tregubov, who dropped to fifth after the third run, successfully won silver with a final run time of 50.56 seconds while Dom Parsons of Great Britain took bronze.

Dukurs, who started the final run in second, dropped to fourth with a combined time of 3 minutes 22.31.

Yun’s 1.63 second margin ahead of Tregubov is the biggest margin of victory recorded at the Olympics since skeleton was reintroduced in 2002. He is not only the first Korean, but also the first Asian skeleton racer to ever win gold at an Olympics.

Kim Ji-soo, the other Korean skeleton racer, hoped for a podium finish but had to settle for sixth place. Despite not going home with a medal, Kim’s Olympic was a success, as he had his personal best race during the third run, clocking 50.51 seconds.

With Yun’s victory, Korea has now won its second gold at the PyeongChang Olympics.