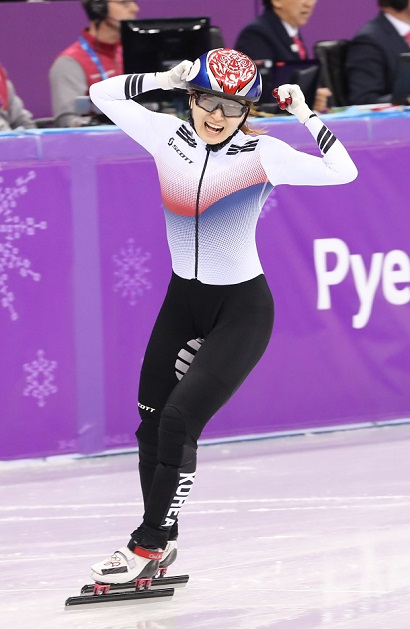 Choi clocked 2 minutes and 24.948 seconds. Having finished first in all the heat races, Choi was dominant in the final, leading by 0.755 second behind silver medalist Li Jinyu of China. Kim Boutin of Canada won bronze.

It was a successful comeback for Choi from Tuesday’s race, when she was disqualified for impeding in the 500 meter race final.

Choi’s victory gave Korea gold in the event for the first time since the 2006 Winter Games. At the 2010 Vancouver Olympics, Shim Suk-hee won silver in 1,500 meters.

Kim A-lang barely missed a spot on the podium, finishing fourth by clocking 2 minutes and 25.941 seconds.

Though the fans expected to see all three Korean short track skaters, Shim finished earlier than others after she fell during the quarterfinal race.

Despite the 1,000 meters being Korea’s other strength, the team had to give up their shot at sweeping the podium even before the quarterfinals race, as the three Koreans – Lim Hyo-jun, Hwang Dae-heon and Seo – were all assigned in the first group.

Seo finished first in the quarterfinals along with Lim and Hwang, who fell in the 1,500 meter final race, missed his spot in the semifinals by falling right before the end of the race.

In the semifinals, Lim and Seo cruised through by finishing first in their group.

Despite having two Korean speed skaters in the finals, they failed to win either gold or silver as both fell during the race. Falling behind the race by quite a margin, Seo managed to finish third, winning bronze for Korea.

By medaling in two races, Korea has successfully redeemed itself from Sochi, where the men’s team finished without a single medal. This is the first times since Lee Jung-su, who won gold at the 2010 Vancouver Winter Olympics, for a Korean to take a medal in the 1,500 meter race.