The unified Korean women’s hockey team had another hard-fought loss in the Olympic tournament Sunday, falling to Switzerland 0-2 in the first classification match. 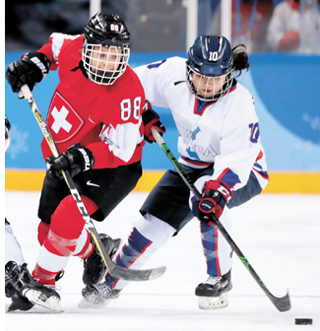 The inter-Korean team, in white, and Switzerland battle for puck control during the classification match. [YONHAP]

The loss dropped Corea to the seventh-place match Tuesday. It will take on the loser of another classification game between Sweden and Japan. Another loss means the last-place finish for Corea, and head coach Sarah Murray won’t accept it.

“Our girls are so hungry for a win,” she said. “The last game, we’re going to play to win. We’re going to show we’re not just the host country just happy to be here. We’re here to win.”

Murray said she has some tough decisions to make. With the addition of 12 North Koreans to her 23-player squad and the provision that at least three North Koreans must dress for each game, Murray has been forced to make some homegrown players healthy scratches.

But on Sunday, forward Jung Si-yun dressed for the first time. Though she only played 1:45 - all in the second period - Jung still got to put on her Olympic jersey. That leaves forward Lee Yeon-jeong as the only South Korean skater not to have dressed at these Olympic Games.

“We’ll try to get those players a chance to wear their jersey, but we don’t know,” Murray said of her bench players. “I don’t know if they’re going to be able to get regular shifts because, even though it’s the last place game, we want to take seventh. We don’t want to take eighth. We want to win.”

Korea was held to just eight shots against Switzerland in losing 0-8 in their first meeting during the preliminary round on Feb. 10. On Sunday, the team put up 19 shots, a few of them on odd-man rushes created off Swiss turnovers.

“It’s good to show that we can play this way,” Murray said. “Our lines really started to click. We’re going to keep building on that chemistry.”

Whether it’s Sweden or Japan that will drop to the seventh-place game, it will be a rematch either way for Corea. Sweden beat Murray’s team 8-0, while Japan won 4-1 in the preliminaries.

Murray said most players want another shot at Japan because, “They want to claim the ‘Best in Asia’ title.”

Japan is the top-ranked nation in Asia at No. 9. South Korea is 22nd and North Korea is 25th.