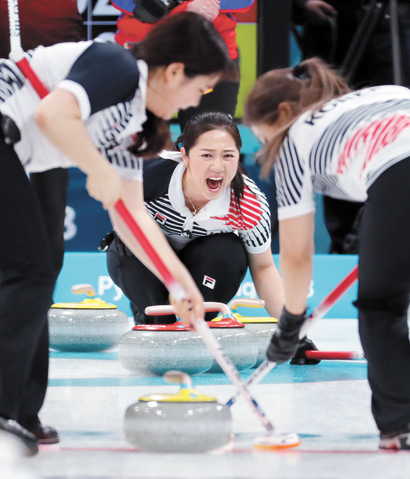 Korea’s women’s curling team secured its spot in the semifinals on Tuesday after beating the United States in the preliminaries at the Gangneung Curling Centre in Gangwon, the first time a Korean women’s team has reached the final stages at the Olympics. Korea trailed the United States 2-3 at the end of the fourth end but scored four points in the fifth end to make it 6-3.

They maintained their lead and finished the match at 9-6. After seven games, the host country has six wins and one loss to place first in the 10-team all-play-all competition, securing a spot in the semifinals with two games still to go.

Korea will continue its round-robin schedule, facing the Olympic Athletes from Russia at 9:05 a.m. today. [YONHAP]