Uniforms increase speed with a flash of style

Uniforms increase speed with a flash of style 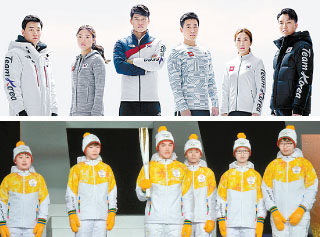 The uniforms for the athletes and torchbearers were designed by The North Face, an official partner of the PyeongChang Olympics. [JOONGANG ILBO, JOINT PRESS CORPS]

Olympic uniforms distinguished countries from each other in the past, but nowadays, athletes depend on their suits not just to cover their bodies with patriotic colors, but to maximize their performance.

The U.S. outdoor sportswear brand The North Face is an official partner of the 2018 PyeongChang Olympics, and is thus responsible for what athletes wear during the opening and closing ceremonies. The North Face uniforms - which are red, navy, white and black in order to symbolize the Korean national flag - will also be worn during training sessions and during awards ceremonies.

Apart from curling and snowboarding, most athletes need to wear skin suits that minimize wind resistance. Short-track and speed-skating teams changed their uniform brands from Fila to Hunter last year, according to the Korea Skating Union. Bobsleigh and skeleton athletes will be wearing outfits designed by Adidas.

For the success of the PyeongChang Winter Olympics, some 25,000 volunteers have been selected. The volunteer uniforms, which were designed by The North Face, were mainly red and grey. Critics have commented that the colors make the uniform look like cuts of beef, while volunteers have complained that the uniforms don’t block wind very well as the coats have been filled with synthetic material instead of down feathers.

The yellow uniforms for the torchbearers, which were said to make them look like “young chicks,” were also designed by The North Face.