Upon completion of the men’s ice hockey final on Sunday, the 2018 PyeongChang Winter Olympics will conclude its 17-day run with a closing ceremony at 8 p.m. at the PyeongChang Olympic Stadium in Gangwon. 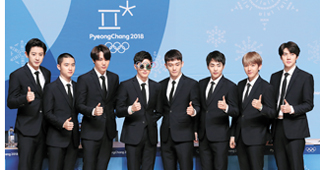 K-pop boy band Exo poses for a photo during a press conference at the Main Press Centre at Alpensia Resort in Pyeongchang County, Gangwon, on Wednesday. [YONHAP]

“It will be performed in an omnibus format,” said Yang Yu-jung, executive producer of closing ceremony, “where the music, dance, art and visuals are not too traditional nor too modern.”

K-pop boy band Exo and rapper CL will perform. Zhang Yimou, the renowned Chinese filmmaker who directed the opening and closing ceremonies for the 2008 Beijing Olympics, will stage a preview of the 2022 Beijing Winter Olympics ceremonies.

Other highlights of the closing ceremony will be a drone show, the athletes’ parade, introduction of the Athletes’ Commission’s newly elected members, a recognition of the work of volunteers and the extinguishing of the Olympic flame.

As a finale, an unnamed, well-known electronic dance music disk jockey will perform.

The PyeongChang Organizing Committee (Pocog) will once again hand out ponchos, blankets, hand and feet warmers to help the audience in the stadium endure the cold as it did for the opening ceremony.

“The temperature on the day of the closing ceremony is expected to be negative three degrees Celsius [with the wind chill factor as low as negative nine degrees Celsius],” said Pocog. “Since they will be outside for a long time, it’s important for the spectators to prepare themselves for the cold.”

Pocog said it will start allowing spectators to enter the Olympic Plaza starting at 4 p.m. Tickets for the closing ceremony can still be purchased online and are expected to be available at the ticket booth on site on Sunday.