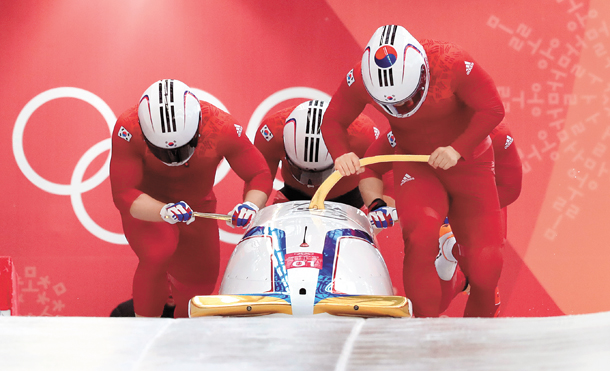 The Korean four-man bobsled team starts their race at the Olympic Sliding Centre in Pyeongchang County, Gangwon, on Sunday. [YONHAP]

Racing second-last in the fourth heat, Korea, led by pilot Won Yun-jong, recorded a race time of 3 minutes and 16.38 seconds, good enough to win silver and tying the record with Germany, led by pilot Nico Walther. The other German sled, led by pilot Francesco Friedrich, won gold, finishing 0.53 seconds ahead of Korea.

“I started thinking about all the times we went through,” Won said after the race. “The challenges we’ve been through all this time have led to a good result. I think we deserve to win this medal more than anyone.”

Korea’s four-man team became the first Asian sled ever to medal in bobsled at the Winter Games. Unlike Yun Sung-bin, who won gold in men’s skeleton, fans weren’t expecting the win as the Korean team is ranked 50th in the world and has only had one top-10 finish this season. Going further back, the team’s career best finish was fifth place during a World Cup race in 2016.

However, they got off to a great start, setting a track record time of 48.65 seconds in their first heat. Their record was quickly reset by Germany’s Team Friedrich as they reset the track record. Korea kept its position in second throughout the four runs over two days.

For Won and Seo Young-woo, who also raced in the two-man bobsled event, a silver medal was a great redemption, as they finished sixth in that event after a poor record in the first heat.

“We couldn’t sleep last night,” said Seo. “We told each other that we would calm down and try to race as comfortably as possible. Though it’s a silver medal, we’re thankful and honored to be the last medalist [for Korea].”

With the goal of winning a medal at the Olympics, the four-man bobsled has been training at the Olympic Sliding Centre since December, missing out on a number of world cup events, which is how most countries have been preparing for the Olympics. To make the most of its home advantage, the Korean team has been racing down the track six to eight times a day.

As the four-man bobsled team didn’t live up to expectations earlier in the season, Korea’s other two-man bobsled duo - Jun Jung-lin and Kim Dong-hyun - decided to drop out of the two-man event to solely focus on working with Won and Seo to develop the four-man team.

“Since no one expected Asia’s first medal [in bobsled], I’m certain that we’ll be better, exceeding expectations,” said Jun.

Though the team impressed fans by coming out of nowhere to claim silver, they are already thinking ahead.

“For us, PyeongChang is the beginning rather than the end,” explained Won.

Though Team Korea didn’t achieve their goal of eight gold, four silver and eight bronze medals, they have set the record for the most medals the country has ever won at the Winter Olympics.

Now that the 2018 PyeongChang Olympics has officially ended, the PyeongChang 2018 Paralympics will take place from March 9 to 18.