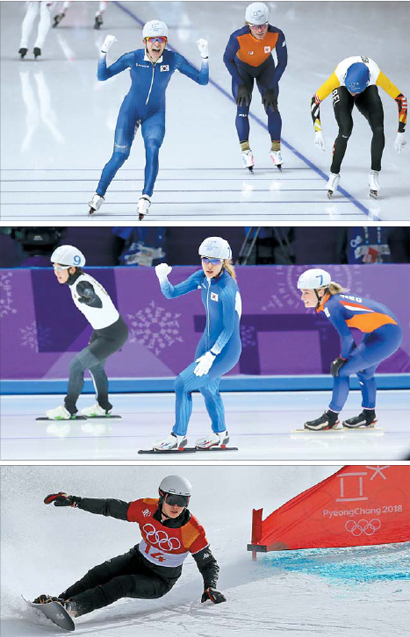 Lee Seung-hoon took home another medal on Saturday, winning gold in the men’s mass start race at the Gangneung Oval in Ganwon. 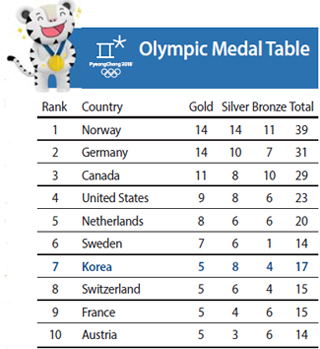 Racing in the bottom of the group, top-ranked Lee started sprinting in the final lap. Though it is an individual race, Chung Jae-won and Lee showed great teamwork. For the majority of the race Chung set the pace for Lee. Then, with less than two laps remaining, Chung slowed down, allowing Lee to speed up for a thrilling come-from-behind victory.

“I am very thankful to Jae-won for letting me keep a distance from the skaters [in the front],” Lee said. “Thanks to the help of Jae-won, I was in a much better situation than I expected. I had a chance when Bart Swings started his spurt in the last lap.”

Even the international media spoke highly of Chung’s role in setting the pace for Lee throughout the race, as NBC reported, “Lee was able to win due to the help of his teammate Chung Jae-won. Chung finished eighth, but was able to set the pace, giving Lee a chance to win in the final lap.”

Lee has now taken home five medals from the past three Olympics, more than any other Asian athlete has ever won at the Winter Olympics.

“I got a lot of pressure but I’m happy that what I’ve been dreaming of has finally come true,” Lee said.

Though Lee was the top-ranked skater in mass start, a medal finish was by no means guaranteed as so much can go wrong in the frantic race. Lee said he competed hoping that the final race would fall in his favor.

“It’s an honor to compete at the Olympics and to win a medal,” Lee said. “But I won an event that has been newly added for PyeongChang in my country. I’ll never forget this moment.”

Having started skating as a short-track speed skater, mass start, which is raced in a format similar to short track, has always been a category Lee was confident in. Once the event was added to the Olympics, Lee postponed his retirement so he could compete.

“I think I’m very lucky,” Lee said. “Once mass start was added, I was given a chance and I’m glad that I didn’t let go of it.”

Prior to the men’s final, Kim Bo-reum won silver in the women’s mass start, finishing behind Nana Takagi of Japan. Kim raced at the back of the group until the last two laps, where she abruptly shot to the front to take the lead.

In her explosive spurt in the final 200 meters, Kim was able to surpass Irene Schouten of the Netherlands but was behind of Takagi by a blade. By finishing second in the final race, Kim received 40 points.

Despite winning silver, Kim’s smile was nowhere to be seen due to the recent scandal from the team pursuit race. Rather than celebrating her victory, Kim continuously apologized. However, Kim said the fans’ cheers helped her to keep on going throughout the race on Saturday. During the Wednesday’s women’s team pursuit race, the fans didn’t cheer for Kim.

“I heard the cheers,” Kim said. “It encouraged me a lot. It was difficult during the race but the fans’ cheer helped me race better.”

After cruising through to the semifinals, Lee had a thrilling victory against Zan Kosir of Slovenia, winning by just 0.01 second. Lee leaned forward with his arm outstretched at the finish line to ensure his victory. In alpine snowboarding, a competitor finishes when any part of their body crosses the finish line.

Though Lee hoped for another miraculous race in the finals, racing against top-ranked Nevin Galmarini of Switzerland, he came up short, finishing 0.43 second behind Galmarini.

“I have no regrets because I’ve tried my hardest,” Lee said. “The color of the medal doesn’t matter.”

Lee’s medal is a huge achievement, as Korea has never won a medal in snowboarding since the country first competed in the event at the 1960 Winter Olympics in Squaw Valley.

“I won the medal but I was scared to fall asleep because I thought it was a just a dream,” Lee said. “I want to thank our sponsors, CJ, Lotte and Korea Sports & Olympic Committee, who helped me since snowboarding was still an unfamiliar sport. Also, I want to thank the fans for coming out and cheering for me.”

Lee is known as “Cabbage Boy” because he first started snowboarding on a slope that used to be a cabbage patch. After his victory fans gave him a bouquet of cabbages rather than the traditional flowers.