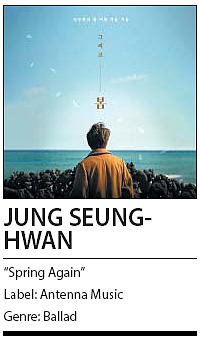 Just from the title, you can tell that this album will be perfect for the time in between winter and spring. From soul-crushing ballads to heart-warming songs, the artist will melt your heart with his mesmerizing voice.

The title track off of Jung Seung-hwan’s debut album “Spring Again” was composed and written by head of Antenna Yoo Hee-yeol and is a sweet song that welcomes spring. The song reminds listeners of their first love. The song describes Jung wanting to spend another spring with his fans.

The song, “It’s Raining,” from the new album, is an emotional ballad that will tug at the hearts of listeners. It tells a story of a broken-hearted man venting his anger and frustration on a rainy day after a breakup.

The runner-up on the fourth season of SBS music competition program “K-Pop Star” worked alongside many artists like John Park, Lucid Fall and IU for this album. One of the tracks on the album,“The Snowman,” features lyrics written by IU. The song is described as a retro folk ballad.