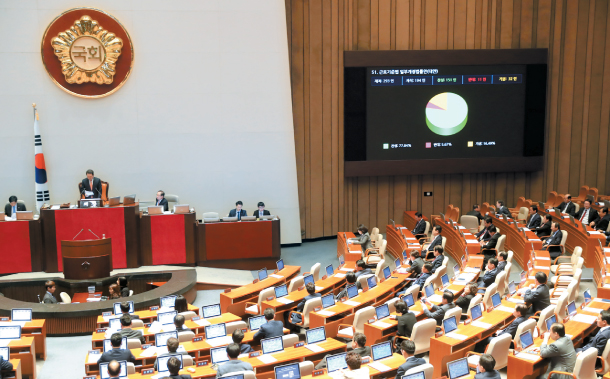 A labor reform that reduces maximum weekly working hours from 68 to 52 hours passed the National Assembly on Wednesday. [YONHAP]

A labor reform that reduces the maximum weekly working hours from 68 to 52 hours passed the National Assembly on Wednesday.

The reform passed the National Assembly on Wednesday with a landslide vote of 151 in favor, 11 against and 32 abstained votes just a day after the ruling and opposition parties reached an agreement.

The new working hours will be rolled out in stages depending on the number of employees a company has. Businesses with over 300 employees will be required to conform to the new hours from July this year. Companies with between 50 and 299 employees will adopt the new regulation from the start of 2020, while smaller businesses with less than 50 workers will make the shift on July 1, 2021.

The staggered rollout is intended to minimize the rising burden of labor costs imposed on small businesses on top of the recent minimum wage hike.

Employers that do not comply face jail time of less than two years or a fine under 10 million won ($9,200).

The move to reduce working hours began after it was reported that Koreans work far longer hours than other major countries, including the United States and Japan.

Korea ranked third among OECD countries after Mexico and Costa Rica for long working hours. As of 2016, the average Korean worked 2,069 hours a year, considerably more than the OECD average of 1,763.

While the shorter working hours are expected to generate more job opportunities, there are concerns that the changes will also become a major financial burden on smaller businesses.

Among the 12 trillion won of additional labor costs that companies would have to shoulder annually, nearly 70 percent is expected to hit businesses that have less than 300 employees.