How Marvel hooked Korean fans: Stars visit frequently and two movies were shot on location in the country

How Marvel hooked Korean fans: Stars visit frequently and two movies were shot on location in the country 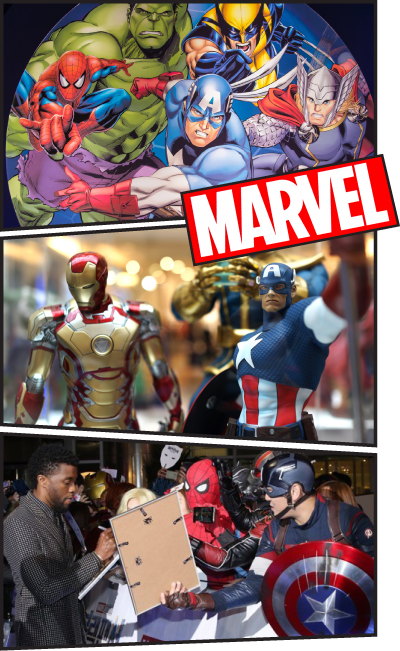 As with “Black Panther,” Marvel films have been particularly successful in Korea. Excluding the major film markets of North America and China, seven of its superhero sagas grossed the most in the Korean market. [SHUTTERSTOCK, YONHAP]

Over the past two weeks, “Black Panther” has firmly maintained its crown at the Korean box office.

Although Marvel’s latest sensation was pushed down to the third spot on Wednesday following the arrivals of “The Princess and the Matchmaker” and “Little Forest,” the box office king has sold a total of 4.8 million tickets since its release on Feb. 14.

During the four-day Lunar New Year holiday from Feb. 15 to Feb. 18, the superhero saga, centering on an African monarch and his state-of-the-art kingdom of Wakanda, sold an impressive three million tickets, vanquishing all the highly anticipated Korean releases including “Golden Slumber,” “Detective K: Secret of the Living Dead” and “Heung-boo: The Revolutionist.”

Although “Black Panther” has not been unreservedly adored by every moviegoer, with some complaining of a lack of humor and weak main protagonist, the Ryan Coogler-directed film, starring Chadwick Boseman, Michael B. Jordan and Lupita Nyong’o, still managed to become the most successful foreign film ever released in February, an important month at the box office because the Lunar New Year usually comes in February.

Cumulatively, Marvel has sold more than 80 million tickets at the local box office with 18 movies including “The Avengers: Age of Ultron” and “Iron Man 3,” which sold 10.5 million and 9 million tickets, respectively.

Marvel’s ticket power in Korea is expected to get a boost from a torrent of new releases.

The studio has confirmed at least two more films for the local market this year: superhero mashup “Avengers: Infinity War,” slated for release in April, and “Ant-Man and the Wasp,” which does not have a release date yet.

Mighty Marvel has globally raked in more than $13 billion with its past 17 movies, but Marvel films are particularly well-received in Korea. Excluding major film markets like North America and China, seven of its movies grossed the most in Korea.

Marvel shot major action scenes in “Black Panther” in Korea’s southern port city of Busan. In 2014, the studio used parts of Seoul and Gyeonggi as locations for the second “Avengers” movie, “Avengers: Age of Ultron,” in addition to casting a Korean actor, Soo-hyun, who also goes by Claudia Kim, as scientist Dr. Helen Cho in the 2015 release.

The fact that Marvel’s superhero stars are frequent visitors to Seoul also proves how much effort the studio pours into the Korean film market.

Since the studio’s first movie, “Iron Man,” played in Korea 10 years ago, star Robert Downey Jr. and Chris Evans, who plays Captain America, have made visits to Korea three times.

Marvel’s continuous wooing of the Korean market has paid off, according to film critic Hwang Jin-mi.

“Although the history of the MCU (Marvel Cinematic Universe) is quite short compared to other American movies series like ‘Star Wars,’” she said, “no American franchise has managed to secure such a fan base in the country.”

Marvel’s short history may work to its advantage. Audiences don’t have to know any backstories to understand its cinematic world and become avid fans.

According to film critic Kim Hyung-seok, audiences in any country laugh or feel thrilled at similar points in Marvel flicks.

“Marvel’s superhero films have neither significant messages nor impressive plots. But they boast outstanding action spectacles and unique superheroes, all with distinct personalities,” said Kim.