The head coach of Korea’s men’s football team expressed confidence Tuesday that his team can reach the round of 16 at this year’s FIFA World Cup. 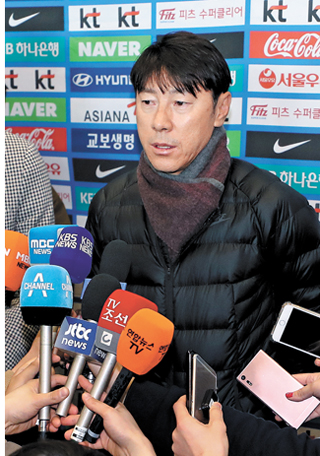 Shin Tae-yong returned home from a 10-day trip inspecting Europe-based players and Korea’s World Cup training base in St. Petersburg, Russia. The 48-year-old coach said if Korea can prepare well, reaching the knockout stage at the World Cup is possible.

Korea is in Group F with defending champion Germany as well as Mexico and Sweden.

“If we work harder and prepare for the tournament thoroughly, I think we can achieve our goal,” Shin told reporters at Incheon International Airport. “There is obviously pressure, but if fans can give us more support, our players will get more energy and do their jobs well.”

In his latest trip to Europe, Shin said he watched Koo Ja-cheol of FC Augsburg and Ji Dong-won of Darmstadt, who both play in Germany, and Hwang Hee-chan, a striker for Red Bull Salzburg in Austria.

“I liked Hwang’s aggressive plays to create opportunities for the team, though he didn’t score many goals,” he said. “Koo was doing fine although he had a cold. Ji had some muscle problem in his ankle, so he wasn’t fit.”

Shin said it’s a good sign that other European-based players like Son Heung-min of Tottenham Hotspur and Ki Sung-yueng of Swansea City are showing good performances in the English Premier League.

Shin’s team will have friendly matches with Northern Ireland and Poland on the road later this month. He is scheduled to announce the roster for two friendlies next week.

“I hope our players can play their best game without getting injured,” he said. “We need to deliver a performance that can give hope to our fans at the World Cup.”

Shin said his selection for the final World Cup squad is almost complete, with a couple of positions that he still needs to think about. But he does not plan to check any more new players.

“I spent two or three years with most of the players, so I know who they are,” he said. “There will be some variables like injuries, but my plan for the final squad is almost done. Since the preliminary entry for the World Cup has been extended from 30 players to 35, I’m going to select my final 23-man squad from that list.”