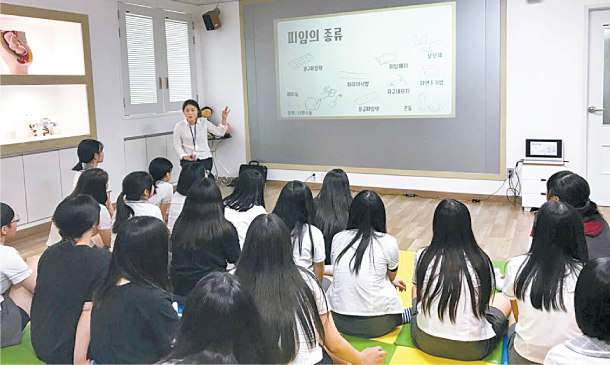 Several months ago, a 16-year-old student posted a question on a portal site Naver, asking what the chances were that his girlfriend had become pregnant. According to his post, he used a plastic bag instead of a condom while having sexual intercourse, and explained that he later found a small hole at the end of the plastic bag.

Though it seems like an odd situation, he wasn’t the only person who shared the concern, as a list of posts asking similar questions regarding various “contraception methods” popped up as related posts on Korea’s biggest search engine. Some even asked if plastic wrap was a viable alternative to condoms.

As seen by the posts, teenagers’ lack of knowledge about sex has left many to question whether sex education in Korean schools is sufficient. Currently, students from around fifth grade of elementary school through high school are required to take at least 15 hours of sex education from a health education teacher annually. But the curriculum is mostly confined to superficial information about restraining sexual desires rather than educating students about sexuality, consent and contraception.

In 2015, the Ministry of Education unveiled the National Level of School Sexual Education Standards as a compulsory nation-wide curriculum for teachers to follow.

But the guidelines, which took the ministry two years to compile and cost 600 million won ($540,000), were met with backlash for its outdated and biased content.

According to the material published, a possible reason for sexual violence is that “women do not pay dating expenses and men want something in return.” It also stated that men have strong and impulsive sexual desires, and therefore, it is important for women to appropriately cope with the situation, putting the responsibility to prevent sexual assault on women. The material also advises victims of sexual violence to “control their negative thoughts and to try to think positively.”

After backlash from the public, the ministry was forced to edit the material after a little more than a year, but organizations are still demanding that more revisions are made.

Despite the outrage, the curriculum is still being used as the basic guideline for sex education in schools, according to Jeong Yun-ji, secretary-general of the Birth Youth Sexuality Center, a sex education and consultation organization funded by the Busan Metropolitan Government and Ministry of Gender Equality and Family.

“Even if teachers want to bring up topics not included in the guideline such as gender identity or homosexuality, talking about such issues is tacitly banned. So the ministry’s curriculum has in fact regressed sex education in schools,” said Jeong.

Some organizations have even called for the need to completely scrap the standards, but the ministry has not officially repealed the publication, according to Wi Chang-hui, the secretary-general of the Korea Youth Sexuality Culture Center, which is affiliated with the Ministry of Gender Equality and Family.

Wi said several organizations have presented the idea of creating new guidelines based on the international standards of sex education, but the education ministry has been avoiding the suggestion with “ambiguous answers.”

Other than the misguided education, the internet and social media are home to many ill-conceived ideas about sex for teenagers.

“Students do need to learn to control their sexual desires, but current sex education in Korea forces them to suppress those desires. So students turn to pornography or explicit videos on YouTube to learn about sex, which gives them the wrong ideas and fail to help them understand that sex without mutual agreement is violence,” Jeong from Birth Youth Sexuality Center explained.

She also pointed out, “Although supporting sexual victims is important, it is crucial to provide students with preventive education on sex to stop similar incidents from repeating. But Korean education focuses more on how to handle sexual assault after it has already taken place.”

Left: Students experience what it feels like to be pregnant while wearing special harnesses. Right: Young students gather to learn about how a baby grows in the womb. [NORTH CHUNGCHEONG YOUTH SEX CULTURE CENTER]

A lack of knowledge regarding the opposite sex is what has caused many cases of sexual harassment or violence at schools or in workplaces, which is being revealed through the spread of the Me Too movement, according to Kim Nam-hui, the head of North Chungcheong Youth Sex Culture Center.

Biased information about women online has created the social phenomenon of yeohyeom, meaning hatred towards women, according to Wi from Korea Youth Sexuality Culture Center.

“It is a vicious cycle, which can be broken by proper education on feminism,” Wi explained while stressing the equal importance to educate school faculties and staff who work with students for long hours.

But as much support as the petition has garnered, feminism education in schools also has its detractors.

In response to the petition demanding compulsory feminism education, many have argued that the change could have adverse effects. “Feminism merely calls for an improvement to women’s rights instead of gender equality. It is a dangerous idea that could result in gender superiority,” one person wrote on the petition website.

Many people are repulsed by the term “feminism.” But despite the discomfort the term causes to certain group of people, many people seem to have grown favorable towards aiming for gender equality education following the recent revelations of the past sexual misconduct of many industry bigwigs. Online articles reporting the misdeeds of big name cultural figures are filled with comments from people crying out for the need to educate students about gender equality, according to Lee Hae-jin, a researcher at the Center for Women’s Culture & Theory.

“Compared to the past, more people have started to respond to the need for gender equality education, and have generally come to agree to its need following revelations of sexual violence committed by high profile figures,” Lee said.

The problem is that many people still feel repulsion towards the term “feminism,” although its ultimate goal is the same as that of gender education.

Misunderstandings about feminism can be easily spotted just by talking to a few students.

“At school, many of my female friends are calling out for ‘feminism’ these days,” said an 18-year-old student surnamed Seon. However, many male students are rejecting feminism because they generally relate the term with radical feminism websites like Megalia and Womad, Seon explained. “I think the common misconceptions about feminism among teenagers makes feminism education more desperately necessary.”

In fact, many people commonly misunderstand feminism as female chauvinism.

To prevent this inaccurate interpretation from spreading, it is crucial to start education on feminism, or gender equality, as early as elementary schools, according to researcher Lee.

“Based on health education teachers’ experiences, elementary school students are most receptive towards what they have learned regarding gender. So it is crucial to begin education early,” said Lee.

Another problem with Korea’s current sex education system is the failure to reflect the changing trends.

With students having sexual experiences earlier than before, and girls having their first period at younger ages, schools should hold in-depth sex education classes from as early as elementary school, according to Kim from the North Chungcheong Youth Sex Culture Center.

“Despite students having their first sexual experiences earlier and the earlier start of menstruation, education dealing with sex mostly takes place when they reach high school,” Kim said. “The speed of progress in sex education hasn’t been able to catch up with the physical development of the students and their changing perceptions towards sex.”

Another factor that is dragging the progress of sex education is the conservative mindsets of faculties at schools.

According to Kim, she tried to conduct a survey on students at a high school to check their level of knowledge on contraception, but was denied by the school principal. She was told, “informing students of contraception tools will encourage students to use them.”

“It was a school with bad reputation for having delinquent students. Such schools should be more concerned about providing proper sex education, but the reality is, they are more likely to shun it,” explained Kim.

In fact, teenagers are legally permitted to purchase condoms at convenience stores. However, they are often given skeptical looks or are turned down from purchasing condoms because employees fear breaking the law in any way.

As parents are some of the closest people in students’ lives, their role in helping their children establish proper understandings about sex is crucial. However, oftentimes, they are the least helpful teachers.

“Bringing up the subject of sex is still regarded a taboo in Korea, so many parents avoid the topic,” Kim explained. “And they often argue there is no need to educate children on sex in their teens ‘because they will naturally learn when they grow up.’”

But parents’ knowledge about sex, based on Kim’s experience, ironically shows a more desperate need for students to be properly and actively educated at schools.