Starting this year, the Korean Basketball League will limit the height of all foreign players to 2 meters (6.5 feet). 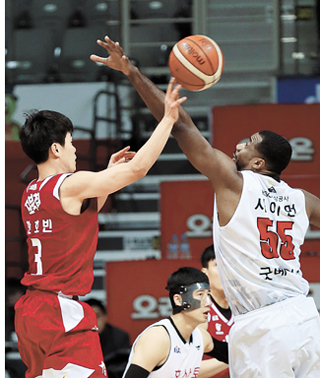 David Simon of Anyang KGC and Han Ho-bin of the Goyang Orion Orions tip off at the start of a game on Feb. 1 in Goyang, Gyeonggi. [ILGAN SPORTS]

Each team is currently allowed two foreign players, one bound by a height limit of 1.93 meters and the other unrestricted by any height regulations. Under the new rules announced Monday, the limits will be set at 2 meters and 1.86 meters.

“The average height of foreign players during the 2011-12 season was 2.7 meters,” a league official said. “The foreign center player kept targeting the inside by pushing his behind against others. It’s a boring strategy to watch in basketball.”

With the new regulation in place starting in the 2018-19 season, fans will no longer see some of their favorite basketball stars such as Rod Benson (2.67 meters) of Wonju Dongbu Promy and David Simon (2.3 meters) of Anyang KGC on the court.

Despite their relatively short stature, Joe Jackson (1.8 meters) of the Goyang Orion Orions and Keifer Sykes (1.78 meters) of Anyang KGC impressed fans and league officials with their performances. In the 2017-18 season, Dongbu Promy’s Deonte Benton (1.95 meters) had the fourth-highest number of points per game, convincing authorities that players over 2 meters aren’t necessary.

But some league officials are not responding well to the change.

“The No. 1 shooter of this season, Simon, is taller than 2 meters, but he has to part with his home fans just because of his height,” said one official. “We’re facing a situation where we have to carry a ruler and measure new potential foreign athletes while asking them to take their shoes off when we go meet them. It’s difficult to find a big overseas athlete who isn’t over 2 meters tall.”

There are also concerns that Korea’s international competitiveness will drop with the new height limits.

For the FIBA Basketball World Cup 2019, Korea is scheduled to compete with China and New Zealand, which have a string of players over 2 meters. Fans are worried that the new rule will dull the skills of the national team and reduce its chances of making it far in the international scene.

“It’s not like shorter players are guaranteed to be high scorers, nor does it mean that taller players bring more entertainment,” another league official said. “What we need to focus on is bringing skilled players and stop arguing about height.”

Television viewership of professional basketball in 2017 was just 0.2 percent, less than a third of the viewership for professional volleyball, while ticket buyers for games have shrunk by an average 2,000 people.

“We need to find a solution to boost basketball’s popularity,” another league official said. “But all we’re doing is coming up with short-term solutions.”