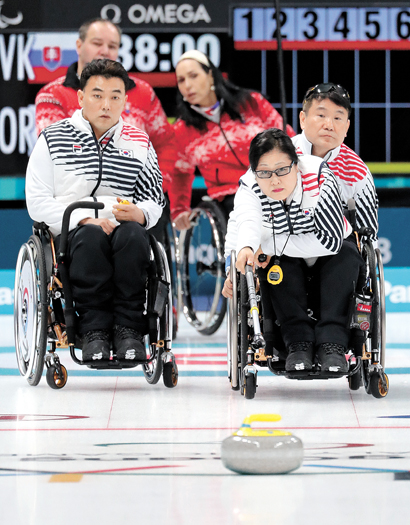 The Korean wheelchair curling team, in white, competes in a round robin game against Slovakia at the Gangneung Curling Centre in Gangwon on Sunday. Korea defeated Slovakia 7-5.
Korea got off to a slow start by allowing Slovakia to take two points in the first end. However, Korea quickly responded by scoring three points in the second. Slovakia took back the lead by scoring again in the sixth, but Korea scored in the seventh and eighth for its third consecutive win at the Paralympic Games.
With another victory, Korea ranks first in the round robin along with Canada at three wins and no losses.
Korea started the round robin against the United States, winning 7-3, on Saturday. Later that day, Korea beat the Neutral Paralympic Athletes 6-5. [YONHAP]