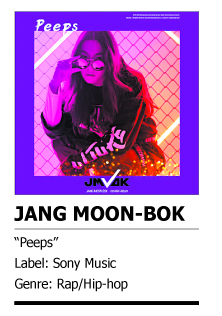 Jang Moon-bok made a striking appearance in Season 2 of music competition show “Produce 101.” His long hair and his unique voice left him many fans, even though he wasn’t able to reach the final stage. The album’s name, “Peeps,” is a slang word for “people,” and is a nod to those who Jang credits his music to. He especially wants to convey his sincerity and passion for music to those who have greatly helped him.

The first single, “Red,” is a love song that talks about a captivating yet dangerous woman, and Jang sings that this woman is “like red.”

The song has an addictive beat and a dreamy sound. Jang’s fellow agency members Yoon Hee-seok and So Ji-hyuk, who also participated in Season 2 of “Produce 101,” are featured as vocalists on the track. Jang’s dark rap harmonizes with the two vocalists, leaving a lasting impression.

Along with Yoon and So, other contestants on “Produce 101,” Sung Hyun-woo and Hwang Ah-young, also contributed to the creation of this album.