Ryu Hyun-jin, the left-handed pitcher of the Los Angeles Dodgers, suffered his first loss of this year’s spring training on Saturday when he allowed five runs on seven hits in just three innings against the Chicago White Sox at Camelback Ranch in Arizona. 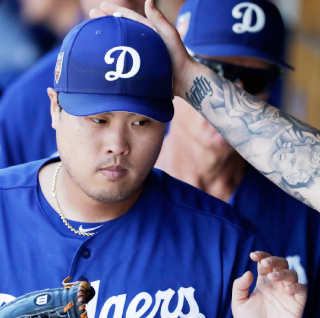 Ryu Hyun-jin of the Los Angeles Dodgers in the dugout during a spring training game against the Colorado Rockies in Scottsdale, Arizona, on March 11. [AP/YONHAP]

The Korean pitcher walked two and struck out two, while making 62 pitches.

Ryu left the game with his team down 5-0. The Dodgers got two runs back in the top fourth but couldn’t generate more offense in a 5-2 loss.

Ryu now sports a 14.29 ERA for the spring. He’s still expected to be in the Dodgers’ starting rotation behind Clayton Kershaw, Rich Hill, Alex Wood and Kenta Maeda.

Ryu is entering the final season of his six-year, $36 million contract. The 30-year-old has been tinkering with his repertoire this spring, trying to add a two-seam fastball to the mix and increase the spin rate of his curveball.

But he struggled with his command against the White Sox on Sunday and needed 24 pitches just to get out of the first inning.

Ryu issued a leadoff walk to Yoan Moncada on a 3-2 two-seamer, and Moncada later came around to score Chicago’s first run on Avisail Garcia’s groundout.

Ryan Cordell’s grounder brought in another run, and Tim Anderson’s double made it 3-0 White Sox in the opening frame.

Ryu allowed an infield single with one out in the second inning. He had a chance to get out of the inning unscathed as Moncada hit a grounder to second baseman Jake Peter.

But the Dodgers’ infield failed to complete what would have been an inning-ending double play, and the White Sox made them pay as Garcia doubled to left center for a 4-0 lead.

Jose Abreu then brought Garcia home with a single up the middle, putting the White Sox ahead 5-0.

Ryu had his only scoreless inning in the third, working around a leadoff single by Anderson.

Five relievers after Ryu held the White Sox scoreless, but the offense couldn’t bail him out in this one.