Moon is proposing a three-way summit

Moon is proposing a three-way summit 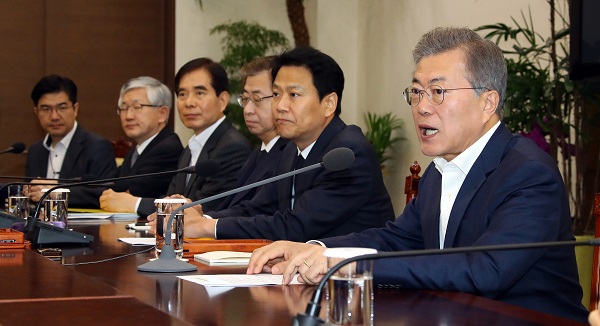 President Moon jae-in presides over a committee preparing for the inter-Korean summit on Wednesday. [YONHAP]

South Korean President Moon Jae-in teased the possibility of a three-way summit for the leaders of the two Koreas and the United States Wednesday during a meeting with his aides at the Blue House, stressing that the summit diplomacy of the next few weeks will have to “completely end” the nuclear crisis on the Korean Peninsula.

Moon is expected to meet with Kim Jong-un in late April for his first summit with the North Korean leader, the third of its kind between the two Koreas since 2000 and 2007. Kim is then supposed to meet with U.S. President Donald Trump for what would be a historic summit between the two countries. The timing hasn’t been decided.

While presiding over a meeting of a committee preparing for the inter-Korean summit, Moon said that a trilateral summit could be held after the two planned summits, “depending on their progress.”

Moon has not gotten consent from Trump or Kim for that idea, a senior Blue House official told reporters later. He will raise the idea with them from here on, he added.

Moon’s proposal for a three-way dialogue is based on the idea that “the South meets with the North, then the North meets with the United States, and then if things go smoothly, the three people can all come together to clarify the agreements a bit more and complete the practical promises,” said the official.

Blue House spokesman Kim Eui-kyeom quoted Moon as saying that the mission to establish peace on the Korean Peninsula can’t be fulfilled “just by an agreement between South and North Korea,” and that the United States would have to “guarantee” that.

During the Wednesday meeting, Moon said that the North-South and North-U.S. summits would be aimed at the denuclearization of the Korean Peninsula, the establishment of a permanent peace regime on the peninsula, the normalization of relations between North Korea and the United States, improvement in South-North relations and economic cooperation between North Korea and the United States, or among both Koreas and the U.S.

Moon’s term “normalization of relations” between Pyongyang and Washington was not the same as establishment of diplomatic ties, said the anonymous Blue House source.

Moon also stressed that South-North agreements needed to be institutionalized and ratified by the National Assembly so that the agreements would be “permanently pushed ahead even though political circumstances change.”

“Whether or not South and North Korea live together or separately,” said Moon, “they shouldn’t interfere [in each other’s domestic affairs] or inflict harm [upon the other country], but rather prosper together and live harmoniously,” implying he wouldn’t seek regime change or force Pyongyang to open up.

The liberal president advised the inter-Korean summit preparatory committee to devise strategies for those goals, share them with Washington, and when collecting data, think from a “neutral perspective.”

“Make sure you’re able to explain and convince how each suggestion benefits South Korea, North Korea and the United States,” Moon said, “and how [each country] gives and takes those benefits” amongst each other.

The Blue House spokesman said Seoul has decided to suggest to Pyongyang that they meet for a high-level meeting next Thursday to hammer out the agenda for the Moon-Kim summit. The proposal, planned to be issued today by the South’s Unification Ministry, which handles relations with the North, will ask Pyongyang officials to convene at Tongilgak, a North Korean-controlled building in the truce village of Panmunjom, which straddles the border. Other topics to be raised that day include the schedule of the summit and participating delegates from each country.

According to the spokesman, Seoul will suggest sending a three-member team for the high-level meeting, including Unification Minister Cho Myoung-gyon and undecided officials from the Blue House and National Intelligence Service.
Seoul also plans to operate a 45-member advisory group for the inter-Korean summit, said Kim, adding that a detailed roster was forthcoming.

The regular trilateral summit involving South Korea, China and Japan is currently being planned for early May, a Blue House official said Wednesday.